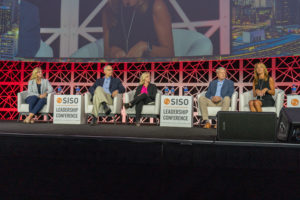 “This year’s conference had a record attendance and a terrific program that was developed as it is every year by a new Planning Committee” said SISO Executive Director David Audrain. “Detroit was a wonderful host, and everyone was impressed with the COBO Center and the city of Detroit!”

Six years after the Motor City filed for Chapter 9 bankruptcy protection, Detroit’s rebirth is apparent, with billions in investments to the downtown area. Part of the new $2.1 billion sports and entertainment district, the Little Caesars Arena, which opened in 2017, is home to the NHL’s Detroit Red Wings and the NBA’s Detroit Pistons. Several new downtown hotels, including the Shinola Hotel and The Element, opened within the last year.

SISO members came out to see the city’s renaissance, with 50 member companies taking advantage of the Send-1-Free program, Audrain said. Each member company could send one employee to the Leadership Conference for free, and the SISO Board approved continuing the program next year.

This year’s SISO Leadership Women’s Forum, developed by the SISO Women Special Interest Group (SIG), drew 75 attendees, compared with 65 attendees in 2018. Held Aug. 12-13, the SISO Leadership Women’s Forum included eight hours of programing over two days, along with networking opportunities at meal functions. The event featured a reception and dinner at the Motown Museum. Attendees dined on SLOWS Bar BQ and toured the Motown Records office from 1959 to 1972 and Studio A, where artists like the Temptations, Miracles and Marvelettes recorded top hits.

After presentations by each company and a Q&A with the audience, attendees voted on the technology they thought was most innovative. Resiada took home this year’s prize.

Networking opportunities included an opening party at the Whiskey Factory. Attendees mixed and mingled during a tour of the distillery and a walking tour of the nearby neighborhoods. The closing party was held at Punch Bowl Social, a venue that offers games, bowling, pool and more.

Look for key takeaways from the SISO Leadership Conference in the October issue of TSE.