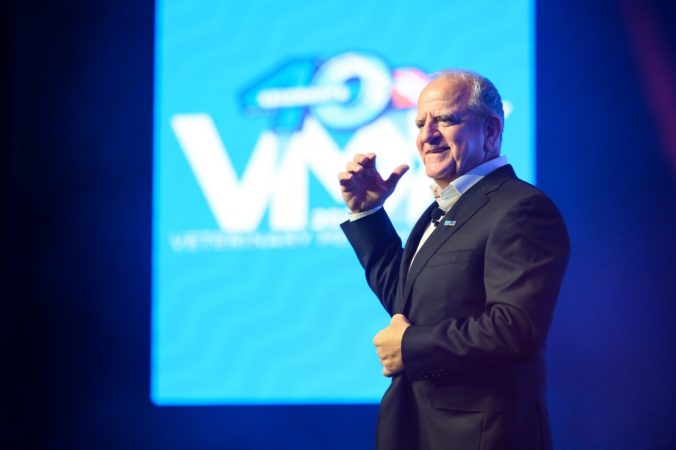 ORLANDO, Fla. — When North American Veterinary Community (NAVC) CEO Gene O’Neill took the stage during the Veterinary Meeting & Expo’s (VMX) opening ceremony on Jan. 14, there was one key difference from previous iterations of the annual veterinary conference: a record setting crowd of attendees.

VMX is hosted by the NAVC, and 2023 was a notable year for the event in several areas. Not only did VMX break its attendance record – O’Neill estimates that once the final numbers have been calculated, nearly 29,000 will have participated in VMX 2023 – but during the opening ceremony O’Neill also announced three initiatives to position NAVC and VMX for continued success in the future.

The second initiative announced will usher in new programming for NAVC, in the form of pop-up events. These educational opportunities, which will be supplemental to VMX, will feature more streamlined and focused content designed for the communities where the events will take place. Topics for the pop-ups will cover a wide range of subjects including recruitment and staffing, mental health, career development and other veterinary team member needs and business operations. This initiative, in addition to the reduced registration pricing for VMX, will help NAVC bring continuing education opportunities to previously underserved parts of the broader veterinary community.

“We believe we are leaders in this space, and we continue to be innovative and do things that our community really needs and is asking for. We are giving back to them in educational needs as well as allowing them to come to VMX with our aggressive pricing. This year alone we had over 9,500 first time attendees at VMX, so we know our strategy is working,” said O’Neill.

The final initiative announced during VMX is NAVC’s all new sustainability program. O’Neill states that the expansion of VMX played a large role in the decision to implement the initiative. “As we continue to grow, we understand that we need to do it responsibly,” he said. Not only will NAVC be working with partners in the event space including hotels and venues to offset the carbon impact of its events, but the organization also plans to promote the sustainability initiative within the veterinary community itself. During the upcoming year, NAVC will focus on setting a baseline from which carbon footprint reduction goals can be derived moving forward.