UKRAINE – According to the United Nations, 2 million refugees have already fled Ukraine. Nearly all of them are women, children and the elderly. About a million have entered Poland, where Pawel Terlikowski, Founder and CEO, Superexpo, is based.

“I couldn’t just sit back and watch what was happening. I had to do something to help,” Terlikowski said. So he packed a work truck with food and medical supplies and drove nine hours to the border. “What we see on TV is just a small snapshot of the tragedy that is taking place,” he said. “Every moment that passes, lives are in danger.” To help with this crisis, he has crossed the border into Ukraine to bring supplies to those who will not leave and continues to do so. “Insulin and medical supplies are especially in demand,” Terlikowski said.

An experienced trade show executive, Terlikowski excels at logistics and has become a point-person for getting goods to people most in need. “I have become a connector,” he said. One family Terlikowki met at the border struck at his heart, and he has committed to ongoing help.

“A distraught young woman caught my attention. She was clinging to an elderly blind man, her two young children clearly desperate and struggling. I later learned that she’d been separated from her own mother in the chaos,” he explained. “I watched in horror as she tried to console her 14-year-old autistic son, shaking uncontrollably, while her 5-year-old son clung to her leg as she guided her father and searched in desperation for her mother. I helped them navigate the crowd, found her mother and drove them to a hotel for the night. They are now in Worclaw, a city in Poland, and I can’t turn my back on this family. I am asking for help for them.” Donations can be made at https://www.siepomaga.pl/en/kateryna-mishchenko 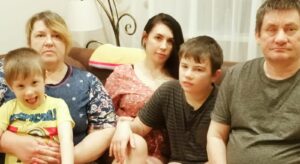 Poland has set up nine reception areas along its border with Ukraine. In addition, expo centers have been converted into temporary accommodations for these refugees. One of these, the Ptak Warsaw Expo Trade Fair and Congress Center, repurposed as a refugee center equipped with 10,000 beds. Playgrounds have been created, as has a dining hall where breakfast, lunch and dinner are served. There are toilets, showers and medical support. The Poznań International Fair is also open to refugees from Ukraine.

Poland isn’t the only country welcoming Ukrainian refugees. In Romania, the convention center in the nation’s capital of Bucharest, has readied itself to welcome those escaping the war.