PARIS – The news from the 28th UFI Global Exhibition Barometer is positive: The recovery is accelerating, and global exhibition revenues are expected to reach 71% of 2019 levels this year. 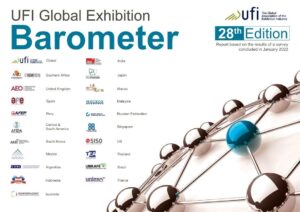 “The sun is finally rising at the end of a long, dark pandemic,” Kai Hattendorf, Managing Director and CEO at UFI, said. “The perspectives for 2022 are brighter and continue to improve quickly.”

When asked to qualify their level of activity as “normal,” “reduced” or “no activity,” from July 2021 and to include their predictions until June 2022, two-thirds of respondents – 401 companies in 53 countries and regions – expect to be operating at “normal” levels in the second quarter. But it was very clear is that the recovery differs in various parts of the world, with some countries, including Germany and much of Asia-Pacific, the Middle East and Africa, behind the curve.

When asked when they expected to be back to normal operations, 6 in 10 North American companies answered “from February 2022 on.” The forecast looks even better for several major markets across Central and South America, at more than 8 in 10. But in Europe, most companies expect normal activity levels from March 2022 onwards, and in Germany, this is not expected until May. The situation is also very different across countries in the Asia-Pacific and Middle East and Africa, where Japan and the U.A.E.appeared to be less severely hit than other countries during the second half of 2021, and only Australia, India and Malaysia are expecting to return to normal activity levels during the first half of 2022.