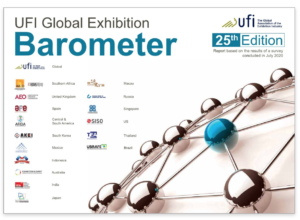 PARIS—Despite the overwhelming loss of revenue and jobs reported in the just-released UFI Global Exhibition Barometer, there are rays of light shining through the mostly dismal results.

Overall meeting activity of respondents—459 organizations from 62 countries and regions around the globe—literally ground to a halt in April and May, with 73% of respondents reporting absolutely no activity at all.

However, a majority of companies do expect local and national exhibitions to open up again in the second half of this year, and two-thirds are projecting at least a “reduced level” in the last quarter of 2020. International exhibitions are the losers, with the vast majority having no expectation of startup again until 2021.

Hand in hand with this virtual standstill in exhibitions has been a precipitous drop in revenues, with respondents predicting that overall 2020 sales will equal just 39% of their 2019 numbers. In 2019, 45% of respondents saw profits increase by 10% or more year-over-year; this year, just 7% of companies expect stable or increased profits.

The losses are more dramatic in certain parts of the world, with the Asia-Pacific region—the first to be hard-hit by the virus—reporting that operations had already shrunk by more than half by February.

Companies in the Middle East and Africa are expecting higher losses in 2020 than in other regions of the world, and that region does not expect even national meetings to open up before 2021. That might have something to do with governmental support: While 44% of companies surveyed received some public financial support, that number dropped significantly to just 30% of Middle Eastern companies.

The other hard-hit region of the world is Central and South America. Respondents there saw revenue drop more than 30% from last year’s revenues, and voiced little confidence in opening up to a normal level of operations in 2020.

A full 60 percent of companies also reported that they have stopped investment in that region, which is hard hit by the virus—especially Brazil, which has the highest number of coronavirus cases after the United States.

So how are companies staying afloat until exhibitions return? A full 87% of companies have cut their costs, with 17% slashing them literally in half or more.

Despite these devastating numbers, respondents still expressed optimism in the future of the exhibition industry.

More than half (57%) said they were confident that “COVID-19 confirms the value of face-to-face events,” and when asked if the industry will return quickly, replied “Yes, for sure” or “Most probably.” Though the vast majority of respondents (82%) are experiencing a push toward hybrid events, only a small fraction—17%—see them replacing in-person exhibitions.

Freeman was the research patron for this survey. The next UFI Global Barometer survey will be conducted in December 2020. Read the entire report here: https://www.ufi.org/archive-research/the-global-exhibition-barometer-july-2020/