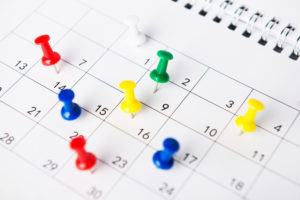 CHICAGO – In the past month some significant shows — like NAB, E3 and the American Academy of Cardiology — decided with their communities to cancel, postpone or go virtual while others — like CONEXPO-CON/AGG, MODEX 2020 and the OFC Conference & Exhibition — decided with input to go forward as scheduled with guidance from the CDC and local health officials.

And, top U.S. shows that postponed announced new show dates in anticipation of the containment of the COVID-19 virus.

Here’s a timeline of some of the key impacts to the trade show industry since the beginning of March.

The Work Truck Show®, which ranked No. 53 on the TSE Gold 100 Class of 2018, opened as scheduled March 3-6 at the Indiana Convention Center & Lucas Oil Stadium. Verified attendance was 13,675, down slightly from last year’s record and the second best in the event’s history, according to show website.
March 6

Bassmaster Classic Outdoors Expo was held March 6-8, 2020 at the Birmingham-Jefferson Convention Complex. In 2019, the event drew a record total attendance of 92,819 over three days.
March 7

The Department of Public Health for the City and County of San Francisco issued an order for two weeks that prevents any non-essential group event from occurring at any city-owned facilities, including Moscone Center.
United introduced new rebooking policies. “To give you the greatest flexibility, when you book any flight with us now through March 31, you can change it for free over the next 12 months – any ticket, any fare type, any destination,” according to a letter from United.
March 8

MODEX 2020 was held as scheduled March 9-12 at the Georgia World Congress Center in Atlanta. MODEX 2018, which ranked No. 58 in TSE 2019 Gold 100 list, drew 31,458 attendees and 937 exhibitors covering 300,124 nsf. The event has an estimated economic impact of $36 million.
Austin Chronicle reported SXSW layed off some 50 employees after cancellation of 2020 festival.
American College of Cardiology’s (ACC) Annual Scientific Session canceled its event scheduled for March 28-30 at McCormick Place in Chicago. ACC launched a free “ACC.20/WCC Virtual” experience that will kick off on March 28 and offer three days of science and learning.
March 10

CONEXPO-CON/AGG opened as scheduled at the Las Vegas Convention Center. In 2017, CONEXPO-CON/AGG drew nearly 128,000 attendees and 2,375 exhibitors covering 2,665,713 nsf. The event had an estimated economic impact of $147.9 million.
Associated General Contractors (AGC) of America Equipment, Technology & Construction Solutions Expo was held as scheduled March 9-12 at the Bellago in Las Vegas.
Hyatt announced it will waive cancellation fees for stays through March 31 for guests with reservations at hotels in Greater China, South Korea, Japan and Italy. “We understand the need for increased flexibility with travel planning right now. To help guests, World of Hyatt is now extending special exceptions for all Advance Purchase Rate non-refundable reservations made directly with Hyatt on or before March 8, 2020 for travel through June 2020.”
A coalition of 150 travel-related organizations issued the following statement on the latest developments around coronavirus: “Health and government officials have continually assured the public that healthy Americans can ‘confidently travel in this country.’”
The Optical Fiber Communication (OFC) Conference & Exhibition opened as scheduled March 10-12 at the San Diego Convention Center.
Ranked No. 98 on the TSE Gold 100 Class of 2018, OFC drew 15,500 attendees and 700 exhibitors spanning 182,687 nsf in 2018. OFC has an estimated economic impact of $17.9 million.
UFI released a global assessment of the economic impact that COVID-19 is having on trade shows and exhibitions. Based on the current numbers and size of the events not taking place, $16.5 billion of economic output have already been lost.
Informa released earnings statement and COVID-19 impacts thus far. It has rescheduled and postponed 115 events.
March 11

WHO made the assessment that COVID-19 can be characterized as a pandemic.
The Southern Nevada Health District confirmed three presumptive positive cases of COVID-19 in Southern Nevada; one a visitor to Las Vegas and two others having been in close contact of a previously reported cases.
The Entertainment Software Association canceled E3, which was scheduled for June 9-11 in Los Angeles. “We are also exploring options with our members to coordinate an online experience to showcase industry announcements and news in June 2020,” according to the E3 website.
IMEX Group Chairman Ray Bloom canceled IMEX in Frankfurt, which was scheduled to take place May 12-14.
NAB President and CEO Gordon Smith announced the NAB Show is off for April in Las Vegas. NAB is reviewing options for event later in 2020. The NAB Show ranked No. 7 on the TSE Gold 100 Class of 2018.
AIPC, the International Association of Convention Centres and UFI, the Global Association of the Exhibition Industry, released the “Good Practices Guide to COVID-19” for convention and exhibition centers.
U.S. President Donald J. Trump announced travel restrictions for foreign nationals from most European nations, but not the UK and Ireland. The restrictions, which took effect at 12 a.m. on March 14, will last for 30 days, Trump said in an address from the Oval Office.
National Basketball Association (NBA) suspended their season after a player tested positive for COVID-19.
March 12: Society of Independent Organizers (SISO) postponed its CEO Summit, which was scheduled to start on March 30 in Dallas. “We intend to reschedule the CEO Summit for as soon as is feasible,” said SISO Executive Director David Audrain.
NCAA President Mark Emmert and the Board of Governors canceled the Division I men’s and women’s 2020 basketball tournaments, as well as all remaining winter and spring NCAA championships.
March 13: U.S. President Donald J. Trump officially declared a national state of emergency. The UK and Ireland were added to the travel restrictions, beginning at 12 a.m. on Monday, March 16.
CONEXPO-CON/AGG closed one day earlier than scheduled. “Due to the growing concerns about COVID-19, the travel restrictions put in place by the President and changing corporate travel policies that impact many of our attendees and exhibitors, we have made the decision to close CONEXPO-CON/AGG & IFPE one day early, closing on Friday, March 13 at 5 p.m.,” the statement on the show’s website said.
Reed Exhibitions U.S. announced new dates for ISC West, which was scheduled to be held March 17-20 in Las Vegas. ISC West 2020 will be held July 20-22 at the Sands Expo Center in Las Vegas.
Exhibitor Magazine postponed EXHIBITORLive, which was scheduled for March 29–April 2 in Las Vegas. Organizers said: “We are in conversations for a rescheduled date for EXHIBITORLIVE with a goal of a fall time frame.”
Emerald announced new dates for the International Pizza Expo and the International Artisan Bakery Expo, which were scheduled for March 31-April 2 at the Las Vegas Convention Center, The postponed events have been rescheduled for June 26-28 at the Las Vegas Convention Center.
March 15: Trade Show Executive announces its Class of 2019 Fastest 50 and Next 50 Honorees

March 16: USTA and AHLA leadership meet with President Trump and urge him to consider $150 billion in relief funds for the industry. USTA also publishes report that projects decreased travel will cost the U.S. $809 billion and 4.6 million in travel-related jobs in 2020.

March 17: Informa Markets announces new dates for their CPhI pharma shows in Japan, Thailand and Philadelphia. The other dates of the massive Asia and Pacific-Rim portifolio remains untouched–including its Shanghai dates in June.

March 18: President Trump signs a paid leave relief bill while Congress worked on a larger stimulus package that could top $1 trillion in relief spending and includes aid for airlines and direct payments to U.S. households.

Illinois joins New York, California and Nevada in enacting mandatory Sheltering-in-Place policies for its citizens in an effort to stymie the spread of COVID-19
March 19: China reports no new loally-transmitted cases for a second day, and report 39 imported cases.