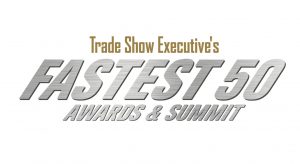 Chicago – The roster of the fastest-growing trade shows held in 2016 has been finalized and will be saluted this spring at the Trade Show Executive (TSE) Fastest 50 Awards & Summit in Chicago.

A total of 87 exhibitions make up the Fastest 50 Class of 2017, which is comprised of the shows that had the highest levels of growth in exhibit space, number of exhibitors and attendance in 2016. Some events made the cut in more than one metric category, including 15 that earned places in all three. In addition, the TSE Next 50 shines a spotlight on 113 shows that enjoyed firm growth rates in 2016 and are hot on the heels of the Fastest 50 field.

“The selection of the Fastest 50 and Next 50 honorees is based on growth—regardless of size or industry sector,” said TSE Managing Editor, Gabrielle Weiss. “At this event, show organizers benefit from the exchange of ideas while celebrating the remarkable growth of these shows and the people behind their success.”

The Fastest 50 Awards & Summit takes place April 19-21 at the Hyatt Regency Chicago, a familiar downtown destination for trade show organizers. The prime location of the Hyatt Regency also serves as a gateway to the Windy City’s famous Magnificent Mile, award-winning restaurants, and its world-class museums and attractions. This year’s honorees and attendees are sure to benefit from outstanding networking events, thought-provoking sessions and a celebration of industry successes all in the heart Chicago.

“The Fastest 50 gathers some of most dynamic and innovative organizers in the industry,” said Diane Bjorklund, Vice President of Events at TSE. “This event is open to all show organizers who want to get inspired, and who want to learn new ways to improve and grow their shows.

Registration and housing information is available at: https://registration.experientevent.com/ShowTSE171.

While there are plenty of major shows on the Fastest 50, smaller niche and regional exhibitions are also well represented. In fact, 70% of the Fastest 50 is made up of shows with 124,000 nsf or less of exhibit space. They include the 18,400 nsf occupied by Pri-Med Midwest on up to the International Manufacturing Technology Show (IMTS), which spread out across nearly 1.4 million nsf. IMTS is one of 19 shows that also appeared on the TSE Gold 100 rankings of largest U.S. exhibitions.

The overall trade show industry showed solid growth in all three metrics last year, which makes the robust increases reported by the Fastest 50 and Next 50 Classes of 2016 all the more remarkable, and makes the TSE Fastest 50 a worthwhile resource and event for the entire industry.