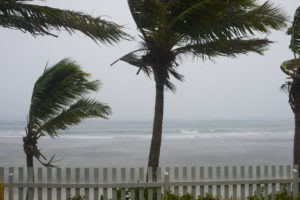 Orlando, Fla. — As Houston begins its long recovery from one hurricane, another major storm is threatening Florida, where show organizers were hurriedly adjusting their calendars to keep customers out of harm’s way.

Convention centers in Miami and Fort Lauderdale were buttoning up in anticipation of Hurricane Irma’s expected landfall on Sept. 10. As of Sept. 7, Irma is a Category 5 hurricane that was expected to diminish slightly once it hits land over the weekend. Florida Gov. Rick Scott publicly warned that Irma was on par with the immensely destructive Hurricane Andrew, which pummeled the Miami area in 1992.

The warnings rippled North to Georgia, where a state of emergency was declared and evacuations ordered for Savannah beginning Saturday, September 9. The order forced cancellation of the September 10 World Soybean Research Conference-10. “On recommendation of Savannah authorities, and in consideration of the safety of our conference participants, the World Soybean Research Conference-10 must unfortunately be cancelled,” Conference Coordinator Kelley Atkinson said in a statement. “This action is being taken under extreme concern for the safety and well-being of our research presenters, exhibitors and attendees.”

Cobb County and the Atlanta area were not among the 30 Georgia counties covered under the state of emergency.

Officials in Miami issued evacuation ordered for Miami Beach on September 7. Scott said at a briefing that those who had remained in the area would have to ride out the storm without help from rescue crews. He also noted that Irma had the potential to generate a devastating storm surge. “Andrew didn’t have storm surge, but this storm does,” Scott said.

The volatility of a surge depends on the timing of the tides. On Thursday a National Weather Service update noted that if Irma hits Florida during high tide, storm surge could be deeper. “We don’t know exactly where this is going to hit,” Scott said on ABC’s “Good Morning, America”. “It sure looks like it’s going to bear down right in the middle of Florida.”

The middle of Florida includes Orlando, where Emerald Expositions was preparing for the Sept. 7 opening of Surf Expo, a semi-annual show that last Fall drew more than 15,000 attendees and 1,001 exhibitors.

Surf Expo was scheduled to open on time on Sept. 7, but close a day early, on Sept. 8, to give show guests and move-out workers an extra day to wrap things up and get out of town. The same schedule applies to the co-located Imprinted Sportswear Show (ISS) Orlando. “Surf Expo leadership has been working continuously with the Orange County Convention Center (OCCC) management and with local authorities,” show management said in a statement. “Every conversation we have and each decision we make starts and ends with our unwavering commitment to our exhibitors, partners and attendees. We believe this to be the best course of action.”

The OCCC calendar also includes the Florida Restaurant & Lodging Show, which was supposed to open Sept. 10 but was rescheduled to Oct. 11-13. “The Orange County Convention Center staff is making the necessary preparations for if and when the storm reaches us,” said Executive Director Kathie Canning. “We will continue to monitor the storm’s path and keep close communications with the Orange County Office of Emergency Management to ensure the safety of our staff and our guests.”

The Miami area is positioned to take a hard punch from Irma. The Miami Beach Convention Center was scheduled to host the Miami International Auto Show, but the opening was postponed indefinitely. “We hope to be able to open the Auto Show sometime next week depending on the movement of the storm, but will continue to work with officials at the City of Miami Beach on just when an opening will be possible,” said Richard Baker, president of the South Florida Dealers Association, promoters of the annual Auto Show.

The convention center, which is undergoing a major renovation, suffered an estimated $450,000 of damage last Fall when a tropical storm breached temporary roofing on the building and torrential rains poured in.

A little to the north, in Fort Lauderdale, the Sept. 13-14 South Florida Build Expo was rescheduled to Dec. 6-7 to give its audience of contractors a chance to catch their breath from what will no doubt be a busy construction period in the Miami area.

Irma is the second hurricane with which Build Expo USA has had to contend. The Austin-based company barely finished its Houston show before Harvey made landfall in late August and dispatched a team of volunteers to assist with recovery efforts.