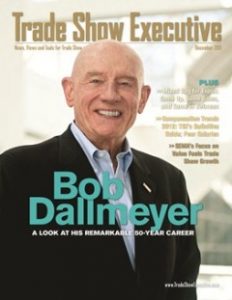 The world lost a legend and a friend. “Despite his pain, and difficulty in speaking, Bob mustered the strength to open his home to a steady array of family and friends in the final days of his life,” said Darlene Gudea, president of Trade Show Executive Media Group.  She said the trade show industry will never see a more gifted and generous leader. “The trade show industry lost one of its greatest statesmen. We are at a loss to deal with the passing of our beloved colleague and friend, but we will forever remember him and be enriched by his lasting contributions to the exposition industry, reflected in his teachings, books and writing, and his legendary Power Lunch column.”

Bob was diagnosed in late 2013 and required major surgery in December. His personal Facebook page (https://www.facebook.com/bob.dallmeyer) reflects the love and admiration from hundreds of friends, protégés and colleagues around the world.

The International Association of Exhibitions and Events (IAEE) has created an education fund in his name and is accepting donations through IAEE headquarters in Dallas.

Bob was a long-time member and past chairman of IAEE and the Trade Show Exhibitors Association. He received IAEE’s Legend of the Industry Award andwas a member of the Convention Industry Council’s Hall of Leaders.

In 2011, the tables were turned, and Bob was the guest of honor rather than the interviewer for Trade Show Executive’s Power Lunch column.  He appeared on the cover of the December issue, and his Q&A session with TSE editors commemorated his upcoming 50-year anniversary in the business and his ideas on going forward.

Bob was also a regular speaker at trade show industry events and a teacher who has passed on his insights and experiences to students of the exhibition industry around the world.

Reach Darlene Gudea, president of TSE Media Group, at (760) 630-9111 or dg@tradeshowexecutive.com; Beverly Elliott, who is in charge of donations to the IAEE Bob Dallmeyer Education Fund, at (972) 687-9203 or belliott@iaee.com

Funeral arrangements have not yet been announced; TSE will provide continuous updates.