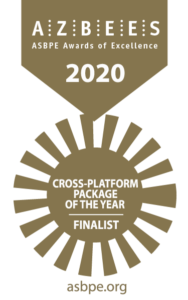 CHICAGO — Trade Show Executive (TSE) has won two national 2020 Azbee Awards of Excellence given by the American Society of Business Publication Editors (ASBPE), including being named as a finalist for the coveted Overall Excellence – Cross-Platform Package of the Year, and the National Bronze Award for the article, “Women to Watch,” that appeared in the December 2019 issue.

“The film industry has the Oscars, and the business publication industry has the Azbees,” said TSE Chairman Rick Simon. “In both instances, winners are determined by their peers, making both the highest forms of recognition in their respective fields. I am extremely proud of Gabi Weiss and the entire Trade Show Executive team. These great honors, three regional followed by the two national, tell the rest of the world what we in the trade show and events community already know: TSE is the gold standard in the business publication industry.”

The Azbees honor the best in business-to-business media, recognizing outstanding work by B2B, trade, association and professional publications. One of the most competitive award programs for trade media, the Azbees highlight editorial, online and design excellence in magazines, newsletters and digital media. TSE was victorious, competing against more than 1,000 entries submitted by business publications across the United States.

The honors follow TSE’s success of 2019, when it was recognized as one of the top ten B2B magazines in the nation by ASBPE.

“Twenty Years of Trade Show Executive” won the distinction of overall excellence in the Cross-Platform Package of the Year category. This award recognizes outstanding content presented in a combination of print and digital formats. Written by Editor-at-Large Danica Tormohlen, the piece was the July 2019 cover story and the first of the “TSE Talks” podcast series initiated last year in conjunction with the magazine’s 20th anniversary. TSE augmented the story by expanding it on its website and sharing it in various digital formats and on its social media platforms.

“As the world changes, we must all evolve, and that is exactly what we did with ‘Twenty Years of Trade Show Executive,’” said TSE Vice President and Editor-in-Chief Gabrielle Weiss. “We combined print, digital and a podcast series with much success. I can’t be prouder of my entire TSE team for their hard work and ability to pivot and expand into our digital platforms as we strive to provide our readers with even greater access to TSE content.”

These two national awards were in addition to three regional Azbee Awards TSE won. Click here for a look at the regional awards.