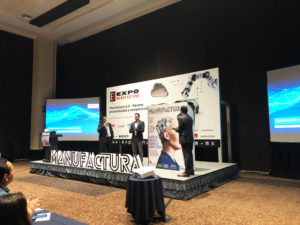 BETHESDA, MD – Tarsus Group acquired 100% of its joint venture with E.J. Krause & Associates, Inc. in Mexico after it acquired Krause’s 50% share for $18 million in cash.

“Mexico is a large and fast-growing market,” said Douglas Emslie, Tarsus Group Managing Director. “This agreement to acquire the remaining 50% interest in EJK Tarsus Mexico, thereby assuming full control of the Mexican business, represents an excellent opportunity for the Group to accelerate its growth.”

EJK Tarsus Mexico was launched in 2013 and gave Tarsus its foothold in the Mexico market. The venture has been active in Mexico’s manufacturing and industrial sectors with trade shows including Expomanufactura and Plastimagen.

“These deals represent an exciting expansion in our key territories,” Emslie said. “In line with our Quickening the Pace 2 strategy, we continue to buy in minority interests where there is a compelling business case to do so.”

Parting ways with EJK Tarsus Mexico does not mean the end of Krause’s presence in Mexico, which has lasted more than 30 years. “We will probably wind up doing other joint ventures with Tarsus or other parties as long as it is not in competition with the Tarsus events,” Krause President and CEO Edward “Ned” Krause told Trade Show Executive.

“We are happy with the move, but we certainly want to keep our toe in the Mexican market,” Krause said, noting that the exhibitions market remained firm thanks to an effective president and a lack of any major fallout from jousting over the North America Free Trade Agreement.

Krause said his company was also increasing its efforts in the Asian and U.S. markets. The company recently announced the launches in 2019 of American Bike Expo in Secaucus, NJ, and the Southeast Asia Nonwovens and Disposable Hygiene Technology Exhibition & Conference in Bangkok.