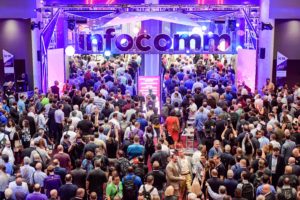 June’s trade shows posted some impressive numbers – including a 34.4% jump in exhibit space at the Annual Police Security Expo, and a 32.6% boost in attendance at the Government Fleet & Expo Conference.It was all part of a jumpin’ June in the trade show industry, according to Trade Show Executive’s monthly Trade Show Dashboard Metrics.

Still, June had many bright spots. Among the highlights and noteworthy happenings:

Top cities in June were Las Vegas, helped by InfoComm, followed by Chicago, which hosted the American Society of Clinical Oncology (ASCO) Annual Meeting and SHRM19, the latter being the largest HR conference in the world. E3 helped Los Angeles rise to third place.

September looks promising, especially the International Manufacturing Technology Show (IMTS), whose last event in 2016 was one of the largest in its history with 1.37 million nsf of exhibit space. Co-located with Hannover Messe USA, it will feature a hot air balloon parked outside McCormick Place in Chicago. Inside, there will be a Digital Factory showcasing the next steps forward in automation.

Another major technology event will come to Los Angeles – the Mobile World Congress Americas. Last year, it had more than 280,000 nsf and 21,000 attendees. Several medical and healthcare meetings are also on the September calendar, including Reed Exhibitions’ International Vision Expo West in Las Vegas, and Emergency Nursing 2018 in Pittsburgh.

On tap this fall are the TSE Gold 100 and Fastest 50 shows Solar Power International, held in sunny Anaheim, and the Water Environment Federation Technical Exhibition & Conference (WEFTEC) in New Orleans.

New Hope Media, now part of Informa, will launch a new industry awards program recognizing natural products favored by consumers during its Natural Products Expo East in Baltimore. That should drive up attendance at the show, which last year was a record 28,000 people.