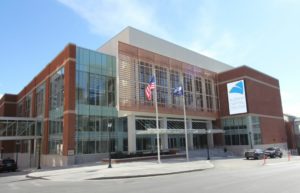 ALBANY, NY –The new Albany Capital Center (ACC) is teaming up with a pair of small-college athletic conferences to launch a tournament and conference for competitive video gaming next year.

It was announced in September that Hudson Valley Gamer Conference (HV Gamer Con 2019) would debut March 30-31 at the ACC, which opened for business in downtown Albany last year. The event will feature competitors representing a handful of colleges from the Eastern College Athletic Association’s (ECAC) and the Metro Atlantic Athletic Conference (MAAC). “We are working with the ECAC and MAAC on the execution of the tournament, and they are securing the teams and running the logistics of the tournament,” Doug McClaine, SMG’s General Manager of the ACC, told Trade Show Executive.

“We feel privileged to collaborate with these conferences that are at the forefront of bringing esports to the collegiate market,” McClaine said. “It’s always been our goal to get involved in this industry in some capacity.”

The ACC includes 22,500 square-feet (sf) of ballroom and exhibit space, six meeting rooms totaling 9,200 sf and 13,500 sf of pre-function space. It is located within walking distance to hotels and downtown nightlife in the state capital. McClaine said the building’s internet system, managed by Tech Forward, Inc., featured a capacity of 1,000 mbps and could support up to 1,000 simultaneous users.

The HV Gamer Con will bring together the best gamers from the ECAC and MAAC who will compete against one another playing three popular video games. “The ECAC already has rights to two of the games,” McClaine said. “We are awaiting approval on the third and hope to have an announcement in a month or so.”

The event will accommodate more than 800 spectators. It will also feature a conference on competitive video gaming and an exhibition with space for around 50 vendors. The exhibitors will include area colleges, game developers, and lifestyle brands. The Empire State Development Corporation will be there as well to tout its Digital Game Hubs established at Rensselaer Polytechnic Institute and New York University.

The HV Gamer Con team also includes the Albany area’s Center for Economic Growth (CEG), which sees the event as an opportunity to raise the region’s profile in the gaming industry and also among aspiring college students. “Hudson Valley Gamer Con 2019 will enhance CEG’s efforts to showcase the regional assets that enable video-game companies to thrive here,” said CEG President & CEO Andrew Kennedy. “This event will also show esports participants and software developers that the Capital Region is a great location to get a college education and rewarding careers within our local studios.”