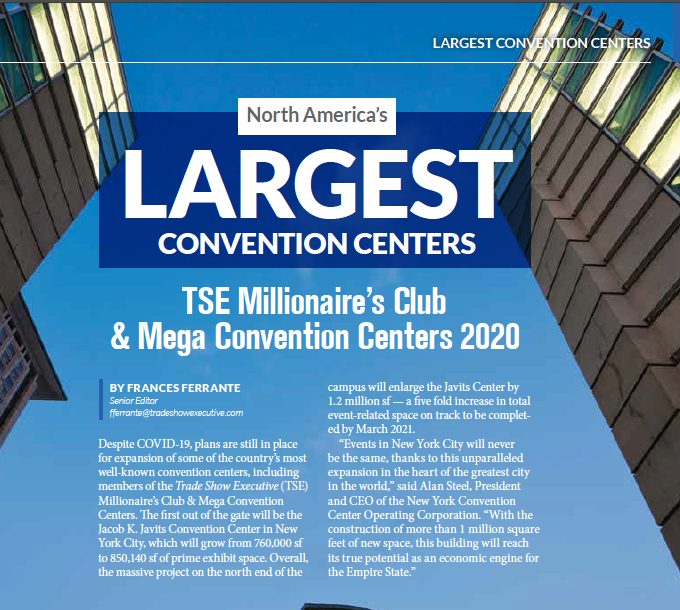 Despite COVID-19, plans are still in place for expansion of some of the country’s most well-known convention centers, including members of the Trade Show Executive (TSE) Millionaire’s Club & Mega Convention Centers. The first out of the gate will be the Jacob K. Javits Convention Center in New York City, which will grow from 760,000 sf to 850,140 sf of prime exhibit space. Overall, the massive project on the north end of the campus will enlarge the Javits Center by 1.2 million sf — a five fold increase in total event-related space on track to be completed by March 2021.

“Events in New York City will never be the same, thanks to this unparalleled expansion in the heart of the greatest city in the world,” said Alan Steel, President and CEO of the New York Convention Center Operating Corporation. “With the construction of more than 1 million square feet of new space, this building will reach its true potential as an economic engine for the Empire State.”

The TSE Millionaire’s Club & Mega Convention Centers 2020 list comprises a total of 41 venues in the United States with a minimum of 350,000 sf of prime exhibit space. Of those, 11 have 1,000,000 sf or more — our exclusive Millionaire’s Club. These are the big-name venues that host all the major shows, from the largest facility in the country — McCormick Place in Chicago, with 2,600,000 sf of prime exhibit space — to the smallest of the group, the Anaheim Convention Center with 1,013,607 sf. Anaheim is about to benefit from two recently approved redevelopment plans that will bring a large food hall, restaurants, retail shops and two hotels to the area surrounding the center.

Moving into the rest of North America, the Millionaire’s Club includes two Canadian complexes: the combined Enercare Centre & Beanfield Centre complex in Toronto and The Toronto Congress Centre, both of which have 1,000,000 sf of prime exhibit space. There are no centers in México of Millionaire’s Club status, but the country is home to six Mega Convention Centers, the largest of which is Expo Guadalajara with 679,492 sf of prime exhibit space.

Combined, the 54 TSE Millionaire’s Club and Mega Convention Centers in North America represent 39,846,171 sf of prime exhibit space, with an average of 737,892 sf per facility. Among U.S. states, Texas has the largest number of these facilities (five), followed by Nevada and California with four apiece, and Georgia with three.