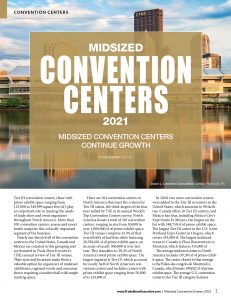 Tier III convention centers, those with prime exhibit space ranging from 125,000 to 349,999 square feet (sf), play an important role in meeting the needs of trade show and event organizers throughout North America. Nearly one-third of all convention centers in the United States, Canada and México are Tier III venues and are featured in Trade Show Executive’s World’s Top Convention Centers survey.

New Tier III venues completed during the past year include The Expo @ World Market Center Las Vegas and CAESARS FORUM, both located in Las Vegas, Nev. The Oklahoma City Convention Center, Oklahoma City, Okla., and the Resch Expo, Green Bay, Wis., are both slated to open in January of 2021. An expansion at the Broadmoor in Colorado Springs, Colo., moved this center from a Tier IV classification to Tier III in March 2020.