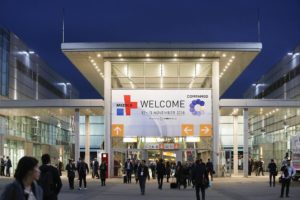 DUSSELDORF, Germany – A knack for drawing crowds from around the world led to record attendance at two key events for Messe Dusseldorf this month.

The German organizer reported impressive growth in attendance and exhibitors at its Nov. 12-15 MEDICA 2018 in Germany, and in Shanghai as well at ProWine China, held Nov. 13-15 at the Shanghai New International Expo Center.

The final exhibit-space totals were still being tabulated, but both shows reportedly experienced noticeable growth in the number of square meters sold.

The aisles at the co-located MEDICA and COMPAMED in Dusseldorf were packed with about 120,000 attendees; some two-thirds of the crowd traveled to Germany from 155 nations.

More than 80.0% of MEDICA’s 5,273 exhibitors came from 66 different nations while COMPAMED counted 783 exhibitors from 40 countries. Both events set show records for their number of exhibitors.

Moreover, MEDICA’s emphasis on new technologies to increase the cost-effectiveness and overall efficiency of healthcare has tapped into a sense of urgency among international buyers. “Benefits for patients are a more efficient use of medical on the one hand and easier access to specialist know how on the other hand, for example when experts from neighboring university hospitals or even from abroad can be consulted virtually,” said Horst Giesen, Global Portfolio Director, Health & Medical Technologies, at Messe Düsseldorf.

New start-up companies stepped into the spotlight each day at the MEDICA DISRUPT feature where they made their pitches on new products for diagnosing, treating, and monitoring various medical conditions.

The United States was also well represented on the show floor with 423 exhibiting companies, 200 of which were part of two U.S. pavilions organized by Messe Düsseldorf North America.

No Trade Troubles at ProWine

While the United States and China may not be having the best year in terms of international trade relations, the global wine industry appeared to be getting along famously in Shanghai.

The growth of the show appeared well balanced with attendance from mainland China increasing noticeably and 80.0% of the exhibitors coming from 39 different nations, including the United States.

“ProWine China is the only trade fair with this outreach to the entire mainland China market,” said Marius Berlemann, Global Head of Wine & Spirits and Director of ProWein at Messe Düsseldorf. “This reinforces the strategic position the exhibition plays in fulfilling the demand for a dedicated platform in the Chinese market.”

The enthusiasm surrounding the show also had participants thinking big about the future with the possibility of creating a “wine week” in Shanghai, Messe Düsseldorf said.