Medical Meetings in Stable Condition in Second Half of 2013

Oceanside, CA – Medical meetings continued to hold their own in the second half of 2013, but there was no miracle cure for the sluggish performance of the entire year, according to Trade Show Executive’s Semi-Annual Medical Show Report. 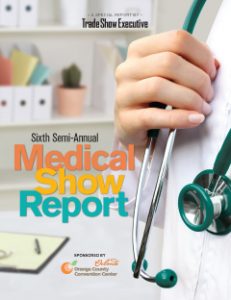 The three key metrics for medical and healthcare conferences and exhibitions were fairly flat in the final six months of the year, which rounded out a full year that saw attendance slip compared to 2012 and exhibit space stall. The second half included a slight 0.4% increase in the number of exhibitors compared to the last six months of 2012. These exhibitors, however, took out (1.3)% less exhibit space. At the same time, attendance was off (1.2)%.

The exhibitor metrics for the entire 2013 calendar were fairly stable. The exhibit space total, in fact, was exactly 0.0% unchanged from 2012 and the exhibitor count drifted a modest (0.9)% lower. Attendance was more worrisome with a decline of (2.1)%.

The second half shows averaged 87,006 nsf of exhibit space, 333 exhibitors and 15,564 doctors, dentists, students and other types of attendees filling the aisles and session rooms.

Six of the 21 shows in the second half were greater than 100,000 nsf. Three gatherings were large enough to make the Trade Show Executive (TSE) Gold 100 rankings of largest U.S. trade shows of any type: the Radiological Society of North America (RSNA) Scientific Assembly & Annual Meeting, the American Academy of Ophthalmology Annual Meeting, and the AACC Clinical Lab Expo, which was also part of the latest TSE Fastest 50 roster of fastest-growing exhibitions.

Most of the shows surveyed reported little change in their results. Only three grew in all three metrics. At the same time, just four experienced across-the-board declines.

When Winter approaches, the threat of snowstorms paralyzing air travel kicks in. But scientific conferences can still lure attendees with agendas packed with presentations on the latest advances and discoveries in their fields.

Two Gold 100 conferences in the second half made sure there were plenty of studies being presented at their events to satisfy anyone’s hunger for knowledge and for their Continuing Medical Education credits.

“We are always looking to optimize the meeting experience for our attendees,” said Mark Watson, RSNA executive director. “RSNA 2013 offered approximately 5,000 scientific presentations and posters along with education exhibits and a vast array of technical exhibits.”

In Houston, the American Association for Clinical Chemistry (AACC) ramped up its agenda to cover a hefty five days of sessions.  The AACC Annual Meeting and Clinical Lab Expo was joined this year by the Canadian Society of Clinical Chemists, which co-located one of its meetings with the Americans.

Moving on, the first six months of 2014 includes a collection of medical conferences which have good track records. Several will be honored at Trade Show Executive’s Gold 100  Awards & Summit and others reported good growth numbers in 2013.

One of the largest, International Vision Expo East, takes place in New York at the end of March. Exhibit space last year grew 2.6% to 262,202 nsf.

Reed Exhibitions this year teamed up with The British Contact Lens Association to launch the two-day Global Contact Lens Forum, which will take place on the eve of Vision Expo.

The calendar also includes the HIMSS Annual Conference & Exhibition in Orlando, which was held in New Orleans last year and grew 5.7% to 495,415 nsf.