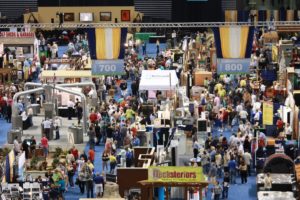 CLEVELAND – Marketplace Events (MPE) completed its 11th acquisition in three years with the purchase of nine home shows from Show Technology Productions. With the acquisition, MPE entered three new markets: Austin, Texas with four shows, San Antonio, Texas with three shows and Lexington, Kentucky with one show.  The deal also includes a show in Charlotte, North Carolina. Owned by Sentinel Capital since 2016, MPE has grown its consumer show portfolio to 75 events in 34 markets.

Baugh told Trade Show Executive the acquisition is the largest both in the number of shows and total revenue.  “The operational impact on Marketplace Events will also be significant,” he said.

Based in San Antonio, Show Technology Productions will continue to own and operate 19 consumer events. The acquisition does not include staff.

“While Lexington and Charlotte will be run by current teams, Texas is a game-changer for MPE,” Baugh said. “This acquisition has us opening a new regional office in Austin and has created eight new positions within the company to operate our shows in Texas, Oklahoma City and Phoenix. It creates a lot of opportunity for our people.”

Overseeing the transition will be Brent Keller, VP Operations & Integration, a 25-year veteran with Marketplace Events.  Joe Trimble, Regional Sales Director, will move to Austin to manage sales for the acquired shows.  Shelly Gepfert, VP Marketing, who has been with Marketplace Events for 13 years, is already located in the Austin market, as is long-time exhibit sales consultant Laura Martin, a 19-year company veteran, who will begin selling on the Texas shows immediately. MPE will also run its two Oklahoma City shows out of the new Austin location.

“We have a good crew of longtime employees who provide a solid foundation on which to build a new team to manage these shows,” said Keller.  “We have a quick turnaround, acquiring these shows in April and running our first shows four months later in August. We’ve got the right people in the right place, and I am confident in our ability to grow these shows.”

“The Charlotte show, with 150 exhibitors, is smaller than we typically operate, but the show has lots of upside and is in a market where we already operate a larger show in a different venue,” Baugh said. MPE operates a home and garden show in Charlotte, along with the 12-day Southern Christmas Show.

“Overall, we anticipate growth in every one of these markets,” Baugh said.