Holiday weekend economic indicators give the trade show industry reasons to be cautiously optimistic about the projected recession.
Since restarting conventions this spring, Thailand’s exhibition industry has seen a dramatic rebound, with 11 new shows making their debut and the country’s GDP expanding 4.5% in Q3.
Founded by PCMA and Destinations International last year to emerge from the pandemic by reinforcing the power of business events to advance economies and social good, Business Events Week returns March 7-9, 2023, at the Gaylord National Resort & Convention Center.
Dallas voters have approved an expansion of the Kay Bailey Hutchison Convention Center doubling its size by 2026.
Surf Expo in January 2023, held at the Orange County Convention Center on Jan. 4-6, is seeing a 20% increase in attendees and exhibitors.
IAEE’s annual Expo! Expo! is taking place Dec. 14-15 at the Kentucky International Convention Center in Louisville.
Collaboration and ideation took center stage at the 89th UFI Global Congress, held Nov. 14-17 at the Oman Convention & Exhibition Centre in Muscat.
The Consumer Technology Association is creating a more touchless experience at CES 2023 to keep attendees safe and healthy.
China has eased some of its COVID restrictions, announcing new rules that would make it easier to host international trade shows in the country.
Informa Markets’ Premiere Beauty Group, BolognaFiere and PBA finalize monumental deal that makes the joint venture, US Beauty LLC official.
Menu 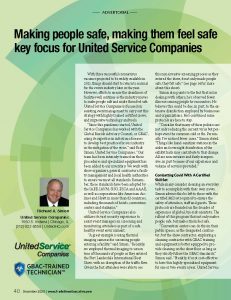 With three successful coronavirus vaccines projected to be widely available in 2021, things should start to return to normal for the events industry later in the year. However, efforts to ensure the cleanliness of facilities will continue as the industry moves to make people safe and make them feel safe. United Service Companies is focused on assisting event management to carry out this strategy with highly trained certified crews, and impressive technology and tools.

“Since this pandemic started, United Service Companies has worked with the Global Biorisk Advisory Council, or GBAC, using its expertise in infectious diseases to develop best practices for our industry in the mitigation of the virus,” said Rick Simon, Founder, United Service Companies. “Our team has been intensely trained on these procedures and specialized equipment has been added to our inventory. We work with show organizers, general contractors, facility management and local health authorities to ensure we meet all standards. Remember, these standards have been adopted by the IAEE, IAVM, SISO, ESCA and AAAE, as well as corporations like American Airlines and Hyatt in more than 62 countries, including thousands of hotels, convention centers and stadiums.”

“A great example is using thermal imaging cameras for screening people entering a facility,” said Simon. “Recently, we employed thermal imaging to screen tens of thousands of people as they entered the Fort Lauderdale International Boat Show, with no disruption of the traffic flow. Given the fact attendees were able to see this non-invasive screening process as they entered the show, it not only made people safe, they felt safe.”

Simon also points to the fact that in his dealings with others, he’s observed fewer illnesses among people he encounters. He believes this could be due, in part, to the extensive disinfection employed by businesses and organizations. He’s convinced some protocols are here to stay.

“Consider that many of these policies are not only reducing the current virus but perhaps even the common cold or flu. Personally, I’ve noticed fewer cases,” Simon stated. “Things like hand-sanitizer stations in the aisles and overnight disinfection of the exhibit halls may contribute to that change. All are non-invasive and fairly inexpensive, in part because of our experience and volume of services provided.”

Combatting Covid With a Certified Skill Set
While many consider cleaning an everyday task to accomplish with their own crews, Simon advises this be left to those with the certified skill set required to ensure the safety of attendees, staff and guests. These protocols are founded on the decades of experience of global, bio-risk scientists. The rollout of this program that not only makes people safe, but makes them feel safe.

“Convention centers can do this in their public spaces, as the designated contractor; but the show contractor, employing a cleaning contractor with GBAC training and equipment is better equipped to provide cleaning on the show floor as long as they strictly follow the GBAC standards,” Simon said. “Frankly, it’s not cost-effective to have this highly specialized equipment for one or two events a year. United Service Companies has developed procedures and manufactured our own equipment. In doing so, we contain costs and adhere to the GBAC standard, and we are prepared to do events across the country.”

While we’re working to get back to the “new normal,” Simon is confident that a joint philosophy and cooperative attitude will be the key to helping people feel safe and reopening the event industry to a rebound in 2021.

“We all have to work together — industry associations, show producers, general contractors, facilities and businesses like United Service Companies — to implement the safety procedures. This, in turn, will allow the public and local authorities to feel safe, attend events and speed our recovery,” he noted.

“As for the future, my company is exploring instant testing programs to utilize until the virus is under control. If it’s something we think can be done, we’ll bring it to the industry to help promote that feeling of safety. The horrific impact of the pandemic began to take off in March in the United States. Yet, look at what we as an industry have accomplished between March and November with the specialized cleaning protocols — adhering to GBAC standards — we’ve put into place, not only for event facilities but airports, hotels and also anyone who takes sanitation and the feeling of safety seriously. It’s simply clear evidence that when we work together we can do good things.”

In working with United Service Companies, all can rest assured that you’ve got a trusted, solution-based partner keeping your show safe and secure. 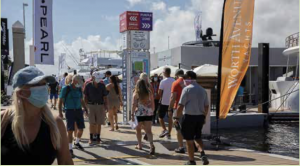 “The success of the show was the result of the hard work of the people at Informa who produced the show,” Simon said. “They did in five weeks what usually takes five months. I was there and the feeling from exhibitor to attendee was all positive. One of the components of that success was what United Service Companies provided. Our security company set up pre-screening using ther- mal-imaging cameras that combined cameras and screens driven by computer software. This allowed the detection of attendees with elevated temperatures as they entered and ensured no disruption to traffic flow. While some people did require secondary screening, we’re happy to report no one was denied attendance for an elevated temperature.”

Simon noted that not only was his company engaged with preparing a clean and sanitized facility to ensure a safe environment, but his team’s presence also helped convey a feeling of well-being to the attendees.

“Our cleaning company added a disinfection team during show hours, distinctly uniformed so the public could see them hand wiping all touch-points during the show hours. We also placed hand sanitizer dispensers every 200 feet in the aisles. These three very visible items not only made people safe, but the optics made them feel safe, and feeling safe is critical to the success of any event,” he noted. “We also provided overnight disinfection, employing electrostatic sprayers. While it’s not visible to the public, it’s an important component of the GBAC standards.”

In addition to these components, the show’s COVID-19 safety measures included mandatory face coverings and social distancing, additional and expanded entrances, contactless ticketing system and reminder signage — per the GBAC standards — posted throughout the event.

As for future events, Simon and other event leaders walked away with other crucial learnings.

“The key is safety, being safe and the optics of feeling safe are very important. Without the feeling of safety, which is a primal instinct, people will not come,” he said. “Using GBAC standards and its protocols, coupled with educational communications, we made people feel safe. From a show organizer standpoint, these are the items we believe should be focused on.”