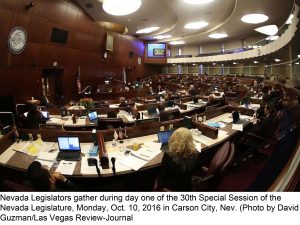 Las Vegas—The Nevada General Assembly approved the expansion and renovation of the Las Vegas Convention Center on Friday. The project is expected to add 1.44 million square feet of exhibit space in Phase 2 of the project at a cost of $860 million. Phase Three will include $540 million in upgrades to existing areas of the center.

Las Vegas – When Nevada Governor Brian Sandoval this week called a special session of the state legislature to consider whether to approve funding for expansion of the Las Vegas Convention Center and a separate proposal to fund an NFL stadium it signaled the importance placed on these projects to the future of Nevada. This was despite some reluctance from legislators to have a special session before Election Day.

But before adjourning on Tuesday, Oct. 11, the State Senate voted to approve a plan that includes $750 million in public funds for a new stadium. The plan reportedly includes the funds for the convention center expansion. The Legislature adjourned for the observance of Yom Kippur later yesterday. The State Assembly is expected to vote on the proposals on Oct. 13.

The proposed $1.4 billion funding for two phases of expansion at the convention center district already had been unanimously approved by Southern Nevada Tourism Infrastructure Committee (SNTIC) in July has widespread support. It is expected to generate all of its funding from an increase in TOT tax of 0.5% on gross receipts in Clark County.

But the NFL stadium proposal, led by Sands Chairman Sheldon Adelson, has generated some concerns—among them infrastructure needs that might result but are not included in the proposal. Adelson has promised to put $650 million toward that project. In September, Adelson said that he believed the stadium was more needed than the convention center expansion, but has been a lone wolf opponent of that expansion.

Megan Tanel, whose group stages the triennial ConExpo/ConAGG trade show that brings more than 100,000 attendees to Las Vegas, said her group is “100% behind the expansion” particularly considering that the funds are generated from the room taxes attendees and exhibitors pay during their events. “We’re not asking residents to foot the bill,” she said.

Tanel, who is not a Nevada resident, said she also is supportive of the stadium proposal because of the additional options it would offer ConExpo/ConAGG attendees pre- or post-show. She said the importance of the convention center expansion was evident by the number of top hotel executives who made the trip to Carson City to speak about the need for Las Vegas to continue to grow its business.

The convention center expansion projects are expected to have the potential to bring as many as 69 additional trade shows to the city over a 10-year period and help maintain the city’s No. 1 ranking for trade show destinations, according to information provided by the Las Vegas Convention and Visitors Authority in July.

Karen Chupka also spoke at the special session. She told Trade Show Executive that “We are hopeful that the Nevada State Legislature understands the importance of passing the expansion and enhancements of the Las Vegas Convention Center and its impact on the future of Las Vegas.” She also called the project “essential to the economic vitality and diversification of Las Vegas as home to the nation’s largest meetings and conventions.”