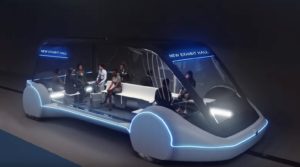 Las Vegas — Talks are under way to bring a high-speed, electric, underground people mover to major destinations in Las Vegas, including the Las Vegas Convention Center and McCarran International Airport.

The Las Vegas Convention and Visitors Authority (LVCVA) selected Elon Musk’s The Boring Company to collaborate with them on the design, construction and operation of the people mover. It would operate in an underground tunnel, transporting people between the convention center, the airport, the Las Vegas Boulevard resorts and downtown.

If approved, the people mover could be up and running in just one year, says The Boring Company President Steve Davis.

A high-speed, eco-friendly people mover would be a welcome addition, especially once the Las Vegas Convention Center expansion is complete (expected in 2021, before CES). It will then be 200-acres long, or about a two-mile walk from end-to-end. The people mover is the only proposed mode of on-property guest transport at this point, said LVCVA Director of Corporate Communications Jackie Dennis.

Following an LVCVA board vote March 12, The Boring Company will begin working on plans and negotiating a contract. It’s expected to be up for LVCVA board approval in June.

While there is no price tag on the project just yet, the LVCVA estimates the people mover’s financial impact would be between $35 million and $55 million.

The Boring Company is working on similar projects around the U.S., including a high-speed people mover between downtown Chicago to O’Hare International Airport and another that would connect Baltimore to Washington D.C.

A 1.14-mile test tunnel for the people mover in Hawthorne, Calif., near Musk’s Space Exploration Technologies Corp. rocket company, costs less than $10 million per mile, including internal tunnel infrastructure, according to the company.