LAS VEGAS — Resilience, meeting safe, and collaboration were the themes of this year’s Las Vegas’ Global Meetings Industry Day (GMID), an initiative focused on advocacy — which is even more critical in a post-pandemic world.

The event was the first to be held in the Las Vegas Convention Center’s new 1.4 million-square-foot, state-of-the-art West Hall, a $989 million addition that joins the existing 3.2 million-square-foot campus. Trade Show Executive was on hand for the panel discussion held in the new addition, with chairs separated by six feet and a mandatory temperature check before entering the building.

The panelists offered optimism. “We are on the edge of being past this; we’re getting near the end of this. We will be able to get back to normal sooner than had been previously predicted,” Hill said. Based on the energy in the city the days leading up to GMID, Hill is correct.

“We see the light at the end of the tunnel,” Massari said. “It’s never been more important to understand meetings and incentives and advocate for the industry.”

The economic impact meetings, conventions and trade shows represent has been showcased like never before as the industry came to a screeching halt last March. “Absence makes the heart grow fonder,” Hill said.

Based on bookings, that absence is a thing of the past. Pent-up demand for face-to-face gatherings is palpable and bookings are following suit. “We’ve booked more in the last 12 months than any other time in our business,” Massari explained.

The Venetian and Las Vegas Sands Corp.’s Allison agreed. “The back half of ’21 is very strong even compared to pre-pandemic levels,” she said.

Wynn’s Flatt concurred. “The pent-up demand is bigger than any of us could imagine,” she described. People are missing the camaraderie a trade show offers. “It’s the energy you feel in the room when you are with people. They come here to have a good time, work and do business. Face-to-face helps cement relationships,” she added.

Although they can appear to be strange bedfellows, they are not. All the panelists collaborated during this unprecedented time like never before. 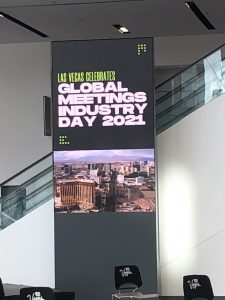 “This is our normal Thursday meeting. There was no information we held to ourselves. We worked together to benefit the industry,” said Glanzer.

One area of vital importance when it comes to information sharing is health and safety. Each resort company represented on the panel has enhanced cleaning protocols in place. They have even taken it one step further by arranging for vaccinations for employees and their families on site.

“Trade shows are more important for any region’s economic revitalization plan. I believe the COVID-19 shutdown showed all how vital these gatherings are for the economy, for innovation, and for doing business. TSE is honored to join Caesars Entertainment in Las Vegas as we join together to advocate for our industry on Global Meetings Industry Day,” said Gabrielle Weiss, Vice President and Editor-in-Chief, Trade Show Executive magazine. “With more than 80% of our readership of trade show executives who are also responsible for smaller ancillary meetings of two thousand or less, attending this year in solidarity with meeting planners was a great way to demonstrate TSE’s commitment to supporting the community.”

The city is preparing for its first citywide since its COVID-19 shutdown — the World of Concrete. “This will be our first real group with a large audience that is coming to the city in early June,” said Hill. “By the time they arrive, everyone should feel comfortable that enough people are vaccinated.”