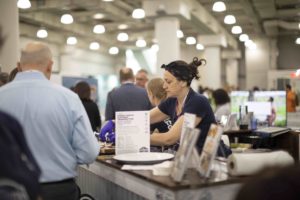 NEW YORK – JD Events’ launch of the Plant Based World Conference & Expo (www.plantbasedworldexpo.com), held June 7-8 at the Jacob K. Javits Center, debuted with 3,737 attendees and 125 exhibiting companies. The business/consumer/healthcare event was supported by four founding partners: The Plant Based Foods Association, Eat for the Planet, The Plantrician Project, and Follow Your Heart. The two-day event was open to the public on the second day.

“When you interviewed me last year, I told you we were on a mission to launch,” Joel Davis, CEO and founder of JD Events told Trade Show Executive. “We looked at 12 emerging markets and ruled out 11. We hired an independent market research firm to evaluate the plant-based industry and then developed our launch strategy. We were fortunate to find a small window of dates at Javits.” JD Events announced the launch in April 2018.

“We had attendees who traveled from all 50 states and countries throughout the world to be a part of this first-of-its-kind event,” said Ben Davis, Content and Communications Director, Plant Based World Conference & Expo. “A healthcare conference, a business conference, an expo open to the general public all rolled into one epic gathering of humans with the common belief that what we eat, how we feel and the world we share are all integrally connected.”

Located in Hall 1C on the lower level of Javits, the exhibit hall featured 125 exhibitors and sponsors in 140 booths. Attendees could sample plant-based foods offerings, including a plant-based seafood from Good Catch, a new cheese and butter made from plants from Miyoko’s, an artisan plant meat from No Evil, faba butter and cookies from Fora Foods, and the coconut ice cream from NadaMoo!

In addition to the exhibit hall, there were three keynote presentations, three education programs and several feature areas.

The Eat for the Future Business Forum, produced in partnership with Eat for the Planet, featured speakers including executives from StrayDog Capital, Bareburger, Wicked Kitchen/Tesco, The Good Food Institute, and Hain Celestial. The forum was designed for retail, food service, product manufacturers, plant-based food companies and food industry professionals to learn about the growth in consumer demand for plant-based foods.

Presented by The Plantrician Project, the Food Solutions for Human Health Summit offered a lineup of doctors, dieticians, and nutritionists who talked about the biochemical, physiologic, and disease-specific effect of a whole food plant-based diet.  The conference program featured nine sessions that offered continuing education credits from Rush University.

At the close of the event, NFL linebacker Derrick Morgan and his wife, chef Charity Morgan, presented a discussion on their transition to a plant-based lifestyle and the benefits experienced by the Tennessee Titan and his teammates.  Other speakers who shared their stories with the public during Community Day included Eric Adams, Brooklyn borough president; Keith Tucker of Hip Hop is Green; and vegan Olympians and bodybuilders such as Dotsie Bausch and Nimai Delgado.

“The launch met and exceeded our financial expectations,” Joel Davis said. The biggest challenge for this show launch? Getting enough exhibitors for this developing industry to commit, he said. “There are a lot of smaller, family-owned business in this space. As of February 1, we had only booked 50 booths. In the final four months, we then sold 90 booths, including two the day before the show opened.”

Representatives from 175 media outlets, including CNN, the New York Times, Reuters and Bloomberg, attended the event. “The timing was great with the recent IPO of Beyond Meat,” Ben Davis said. “The plant-based movement is becoming mainstream.” Beyond Meat went public in March with its first share trading at $46 share before closing the day at $65.75, making it the best performing first-day IPO in nearly two decades, according to MarketWatch.

The 2020 Plant Based World Conference & Expo will be held June 5-6 at the Javits Center.