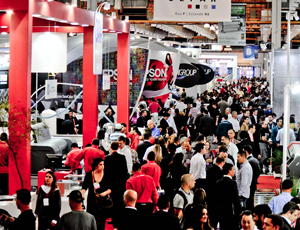 London — Trade shows were a big hit for Informa last year as the company’s Informa Exhibitions division reported a huge 74.5% increase in revenues in 2017 compared to the previous year.

The addition of Penton to the Informa portfolio was credited with giving a shot in the arm to Informa’s overall performance, and more big things are anticipated once UBM joins the team in the Second Half of this year.

“Our strategy for 2018 is growth continuation,” said Group Chief Executive Stephen Carter. “We are very excited about our possible combination with UBM.”

The proposed UBM acquisition was announced early this year and is expected to be completed in the Second Half, giving Informa an increased presence in Asia and the U.S. market. The prospectus for the 3.8 billion pound ($5.2 billion) deal will be released March 14 with shareholders likely to vote on the deal in April.

Appearing at a Feb. 28 briefing for financial analysts in London, Carter declined to provide much detail on how the acquisition would affect either company, although he did say it would have a positive impact on 2018 revenues. “We need to become a combined group before we can answer that, so we may need to wait until we are talking about 2019,” he said.

In its earnings report for 2017, Informa noted the differences and the similarities between Informa and UBM in different parts of the world:

While synergies and cost savings had greased the skids for the integration of Penton into the Informa fold last year, Carter said that opportunities for “low-hanging-fruit” cost reductions were not as plentiful in the case of UBM. It appears, however, that Informa will not try to squeeze UBM simply to reduce costs. “We will seek cost savings, but we’re not making this combination in order to just achieve cost savings,” he said. “We want the combined company to be a growth-based business.”

Growth did not appear to be a problem after seeing the numbers from Informa Exhibitions. The trade show division scooped up 560.4 million pounds ($768.6 million) in 2017, a 74.5% jump over 2016. The adjusted underlying revenue growth rate was a tidy 7.6%. The company credited the integration of Penton’s shows into the Informa arsenal with helping boost the sharp growth along with “increased international scale, depth in attractive verticals and strengthened capabilities in data and marketing solutions.”

“Exhibitions is our largest business, and it will become a larger business,” said Carter.