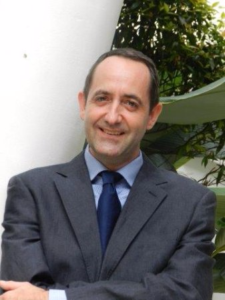 LONDON – Informa Exhibitions has a new leader at the helm of its fashion portfolio, which includes the flagship MAGIC brand acquired in the 2017 blockbuster acquisition of UBM.

Mark Temple-Smith, who had been Commercial Director at Informa, is now Managing Director of London-based Informa’s Fashion Exhibitions unit, which includes WWDMAGIC, PROJECT, COTERIE and the rest of the portfolio. His new role also has responsibility for a three-year plan that Informa is launching to position the shows for a new growth spurt.

“We are pleased to have Mark take on this essential role as we focus on rolling out an initiative that is so important to the fashion marketplace,” Informa Exhibitions CEO Charles McCurdy said. “We believe the combination of Informa’s global approach to B2B events marketing and our customer-first focus, along with UBM’s history and strength in fashion, particularly in the U.S. and Asia, is a powerful engine for growth in the fashion events market.”

Temple-Smith’s resume includes high-level experience in both the Asia and North America markets. As Commercial Director for Informa, he was responsible for new growth initiatives in the Americas. Prior to joining Informa in May 2018, Temple-Smith worked in the Asia market as CEO, Asia for Tarsus Group, and Managing Director, Asia for ITE Group plc. Prior to his stint in Asia, he worked for more than 13 years in executive jobs at Canon Communications, a California show organizer that McCurdy ran for five years and which was acquired by UBM in 2010.

“Fashion is a highly international, increasingly digital and fast-changing market,” said Temple-Smith. “I‘m looking forward to enhancing our brands and platforms and to working closely with our customers to understand and find solutions to their business needs and support their year-round marketing priorities.”

Informa said in a statement that the new growth initiative Temple-Smith would head up would include “enhancements in areas such as marketing, content, digital and customer service.” McCurdy told Trade Show Executive (TSE) further details would be announced in the future.

A top priority could be WWDMAGIC, known as MAGIC. The semi-annual Las Vegas show has long been a fixture for retail buyers and clothing lines. While the February and August editions remain among the largest shows on the TSE Gold 100, growth has appeared stalled amid the transition to Informa. The February 2018 show covered a hefty 1,014,200 net square feet, according to the TSE Dashboard of Monthly Trade Show Metrics, but that was (5.5)% below 2017. Exhibitors were down (5.8)% at 5,327, and attendance slipped (0.9)% to 75,800.