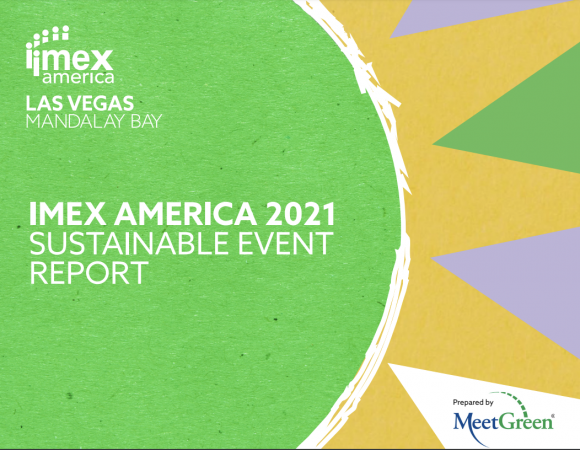 As sustainability continues to top headline news around the globe, organizations in the trade show industry are dedicating resources to minimize their environmental impact. IMEX, the industry’s largest trade show and a Gold 100 winner for its 2021 IMEX America show in Las Vegas, held at the Mandalay Bay Resort & Casino, has been at the forefront of those efforts, making it a practice to monitor sustainability efforts at each show.

The report benchmarks each edition of IMEX America against industry best practices such as the Event Industry Council’s Sustainable Event Standards. This report shows that the 2021 show achieved its highest landfill diversion rate to date of 95%. This along with recycling, composting and donation efforts meant the show achieved the industry threshold for a ‘zero-waste event’.

“We challenge ourselves to do better each year and at this year’s IMEX America we’ll build on the practices detailed in our sustainability impact report,” Carina Bauer, CEO of the IMEX Group, said. “This includes maintaining our status as a zero-waste event with a high landfill diversion rate as well as ensuring our carbon impact remains low.”

At the close of IMEX America 2021, Bauer announced that IMEX would offset 100% of carbon emissions from its Mandalay Bay Convention Center activities for the duration of the show. About 30% of IMEX America’s onsite electricity came directly from the MGM Resorts Mega Solar Array.

“We also have long-term goals,” Bauer said. “We’re committed to achieving net zero by 2050 as part of the Net Zero Carbon Events initiative and will publish our pathway to reach this by the end of 2023.”

The report shows that single-use plastic reduction, which is a high priority at IMEX America, was a success. According to Mandalay Bay’s consumption records, reusable water refill stations at IMEX America saved an estimated 4,436 standard PET water bottles. In addition, the 7,573 aluminum bottles utilized from concession outlets totaled 12,009 PET plastic water bottles eliminated for 2021, according to the MeetGreen report.

There were 795 vegetarian entrees sold at IMEX America 2021. The plant-based meals, when using emission factor averages, saved an equivalent of the emissions from 228 room nights at the average hotel in Las Vegas. In addition, going 100% digital with its show publications last year saved nearly 500,000 gallons of water, which would fill nearly 6,000 bathtubs.

IMEX America also employed sustainable practices on the show floor.  Only 1% of carpet used was sent to landfill; the rest was either returned to inventory or recycled. The show also organized a donation program for exhibitor materials, recovering more than 22,000 pounds of event furniture for donation to Las Vegas community outlets. In addition, some 895 name badges and lanyards were sent to Terra Cycle for recycling.

IMEX America this year will run from Oct. 11 – 13 at the Mandalay Bay in Las Vegas.