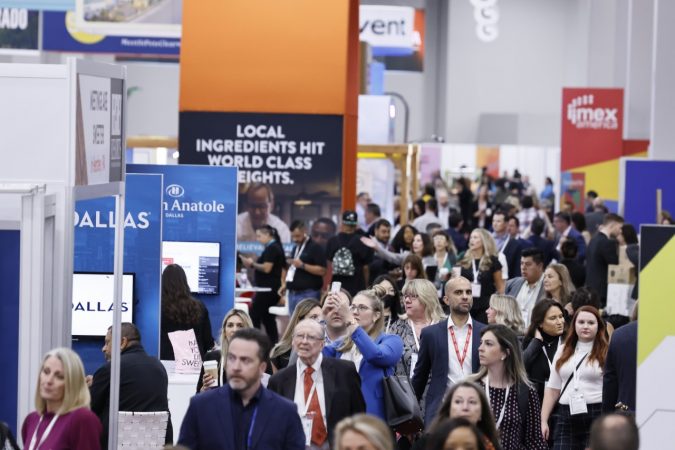 LAS VEGAS - IMEX America, the largest trade show in the U.S. for the global meetings, events and incentive travel industry, wrapped its 11th edition last week with the announcement of some impressive numbers.

The four-day show at the Mandalay Bay in Las Vegas, from Oct. 10-13, drew 12,000 attendees, including more than 4,000 buyers and exceeded last year’s numbers for international exhibitors. Of those who doubled the size of their booths, 24% were from North America, 23% were hotel groups, 15% were European and 12% from Asia.

IMEX Chairman Ray Bloom commented, “The size of this year’s show is obviously a function of many in the industry being able to travel and plan meetings again and to do so with certainty. It’s been a long time coming and, although we a produced a great show last year, this week felt like the big come-back we’ve all been waiting for.”

He noted the 2022 edition was 45% bigger than last year due to an easing of travel restrictions plus 40% of returning exhibitors taking more booth space.

“That’s not to deny that challenges remain. Equally, it seems buyers are being more discerning,” he said. “We’ve heard they’re preparing RFPs in more detail and being more rigorous in their selection criteria.”

Testimonials came in the form of confirmed business from the IMEX show. Tourism Ireland confirmed business to the value of EUR 10 million during the show and Destination DC secured the American Distilling Association event for 2026. According to Bloom, exhibitors reported business being placed as far out as 2028.

Education was one of the primary features of IMEX 2022, which welcomed more than 1,600 attendees to its Smart Monday, which was powered by Meeting Professionals International (MPI).

Bauer said IMEX made sure to offer content based on current issues in the industry. “We made sure to look at what was relevant for the new world that we’re living in. So, we had a number of sessions focused on things like supply chain issues, budgeting, inflation. But at the same time, as always, there was a very strong focus on well-being, sustainability, mental health, diversity and inclusion.”

IMEX asked all stakeholders to make a pledge to champion social impact and environmental responsibility at the show by taking its People and Planet Pledge. Exhibitors who signed the pledge were given a green booth number and included in a listing at the IMEX-EIC People and Planet Village, which was a section on the show floor showcasing resources, tools and innovations to promote social and environmental responsibility. Clean the World was on-site which donates leftover hotel amenities to be distributed through the Las Vegas Shade Tree Shelter for women and children.

During the show James Rees, President of the Joint Meetings Industry Council, announced the start of Phase 2 of Net Zero Carbon Events which will be launching its Net Zero Roadmap for the events industry at COP27 at Sharm El- Sheikh in Egypt on Nov. 11, 2022.

Some 225 operators have signed the Net Zero Carbon Events Pledge since its launch at COP26 in Glasgow in November 2021, committing to publish before the end of 2023 their organization’s pathway to achieve net zero by 2050, with an interim target to reduce global greenhouse gas emissions by 50% by 2030.

The Joint Meetings Industry Council is coordinating and hosting the campaign for the industry worldwide. The number of supporting organizations has risen from 21 in September 2021 to 409 in September this year.

Diversity, equity, inclusion and belonging (DEIB) was also a focus at IMEX. The Event Leaders Exchange (ELX) announced at the IMEX practical initiatives designed to help event industry professionals offer environments at shows that embrace DEIB, including the Neu Project, which encourages new practical tactics of inclusion for neurodivergent communities. The Neu Project started with a small group of event leaders and neurodivergent voices at Google in early 2022. By the launch this October, it had grown into a community of more than 80 direct contributors and hundreds of friends around the globe.

Practical tools include “An Event Professional’s Guide to Neuroinclusion” and “The Neuroinclusive Event Checklist” a framework to help event professionals make inclusive choices while planning shows. Both are now available at www.theneuproject.com

“From our ‘A Voice for All’ program on Smart Monday, to Google Experience Institute’s NEU Project, we’re all invited to understand that events and event designs have excluded too many people for too long,” Bauer said.

Innovation was another focus on the show floor, including Encore’s “Break Free,” an immersive and interactive experience focusing on connection, inspiration and collaboration. The experience used technology to foster personal relationships and partnerships.

Another company, 6Connex, a provider of in-person, virtual and hybrid events, announced at the show the launch of Eventory Check-In, an addition to a suite of mobile event applications, which let show organizers seamlessly manage event check-in by scanning an attendee’s ticket, QR code or registration information.

Destinations International (DI) also announced at IMEX its new Destination Booking Agreement (DBA), a client agreement document that is utilized by a CVB/Destination Organization when they secure a future meeting or convention. It also launched a new toolkit that establishes mutually agreeable terms to protect both the planner and the destination.