Santa Barbara, CA – The 2015 Trade Show Executive Gold 100 Awards & Summit takes place once again on the scenic California coast, and this year’s venue is one of the most special in the event’s history.

Known as the “American Riviera,” Santa Barbara has long been a favorite getaway spot for travelers and an idyllic retreat for celebrities. The elite of the trade show industry will get a heady taste of the lifestyle on September 30-October 2 at the famed Bacara Resort and Spa located a few short miles north of the city on the shore of the Pacific Ocean.

The Bacara is rated one of the “Top 5 Resorts in Southern California” by Conde Nast Traveler, and has been recognized in three separate categories by the Forbes Travel Guide. The Bacara embodies the romance of the California Hacienda style and will be a fitting locale for the annual salute to the biggest and best trade shows of 2014. 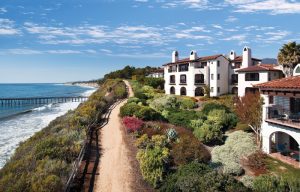 “The Gold 100 Awards & Summit will once again offer CEOs, show organizers and their industry partners a golden opportunity to celebrate their success as they start winding down the year and begin planning for 2016 in a productive and beckoning setting,” said Darlene Gudea, president of Trade Show Executive Media Group. The largest shows of the year will be honored, and top sponsors and staff will present crystal trophies in 12 categories such as the “Top Brand,” the “Marketing Genius” and “The Greatest Show on Earth.” The event will feature a fast-paced summit that will provoke new ideas and new ways of doing things. For networking, delegates will enjoy the TSE Gold Golf Classic at the Sandpiper Golf Club, lunch at Sunstone Winery in Santa Ynez, a clam bake on the sandy shores of the Pacific, and more.

MILES OF SCENIC COASTLINE
Santa Barbara will be a special treat for show organizers who spend much of the year immersed in the hustle and bustle of big cities.

Located just up the coast from Los Angeles, Santa Barbara has a Mediterranean charm with winding streets and intricate stone terraces reflective of the Italian immigrants who helped settle the town in the early 20th Century. The top-tier restaurant scene was featured in a special segment on Food Network.

The ambience and the proximity to Hollywood draws an upscale crowd to the area. In the past, Ronald Reagan, Michael Jackson and Charlie Chaplin have called the area home. Current A-listers include hometown girl Katy Perry who filmed her music video “Teenage Dream” in the city. The Bacara Resort was the site for the wedding of fellow pop princess Fergie to Josh Duhamel.

Gold delegates can fly into Santa Barbara Airport via American Airlines, United Airlines, U.S. Airways and Alaska Airlines. You can connect through Los Angeles, Phoenix, Denver, San Francisco or Seattle. Or, you might want to come early, rent a car, and experience an unforgettable drive up the coast on Highway 101, or travel in comfort on Amtrak’s direct line from Union Station in Los Angeles.

BACARA BASICS
The Bacara is the center of the Gold 100 festivities. Attendees will experience the accommodations and service that earned the Bacara its deserved status as a world-class resort. Bacara is offering Gold 100 delegates a generous special rate of $260 per night during the event, as well as several days before and after.

“Early Autumn is a perfect time of year to visit California and the Bacara is rolling out the welcome mat and the red carpet for this elite gathering of top show organizers,” Gudea said.

The Bacara overlooks the Pacific Ocean and has the golden Santa Ynez Mountains as a backdrop. World-class wineries and restaurants are a short distance away, and the resort’s spa experience rivals the exclusive destinations of Europe. The spa is recognized as one of the best in the world. Its sits above the calming Pacific, and relaxation is at the heart of the Bacara’s philosophy.

MORE TO COME
Details of the education and networking schedule for the Trade Show Executive Gold 100 Awards & Summit will be revealed in the coming weeks as well as the Gold honorees. These alpha exhibitions will be saluted at the awards gala that marks the highlight of Gold 100 week in Santa Barbara.

AERIAL VIEW
Want a bird’s eye view of last year’s Gold Golf Classic and the opening reception? Go to http://65.36.240.184/events/gold100/index-2014.htmGold 100 photography sponsor Oscar & Associates and their mighty drone will be out in full force capturing memorable moments from the event.