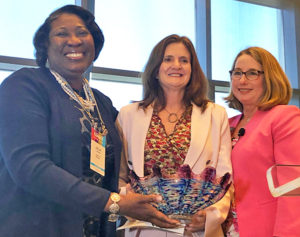 During her acceptance speech, Hoff talked about the strong support and encouragement she’s received from people in the industry, and how much she values the network of female peers she’s developed through her involvement with IAEE. She also offered encouragement to young women starting out in the business.

“When you’re in the industry and you’re a woman, you don’t need to necessarily try to be something you’re not,” she said. “If you’re true to yourself and work hard and set goals for yourself and figure out where you want to be, you’ll be great. You don’t have to have it planned out. There are always opportunities for you. You just have to see how your path develops.”

Hoff, who started her career as a conference coordinator for an association, spent 19 years at National Trade Productions (NTP). She earned multiple promotions until she became Executive Director, Industry Relations. As part of the NTP’s executive team, she contributed to the company’s strategic direction, client and industry relations, staff recruitment and internal processes.

In 2014, she launched Taffy Event Strategies, a full-service trade show and event management company. The company produces exhibitions and conferences including Coverings and ASPE-The American Society of Plumbing Engineers Expo. She’s also contributed extensively to IAEE, serving as chairperson or member of multiple committees and task forces. She currently contributes to the IAEE FutureScaping Task Force and the CEIR Research Council and is a member of the CEM faculty.

Additionally, Hoff contributed to the IAEE’s “Art of the Show Textbook, 3rd Edition” and taught an Introduction to Exposition Management course at Northern Virginia Community College.

This year’s Women’s Leadership Forum, held April 30 and May 1 at the InterContinental Washington D.C., was a sold-out event with more than 200 attendees. Besides the award ceremony, it hosted educational sessions for women at all stages of their careers.