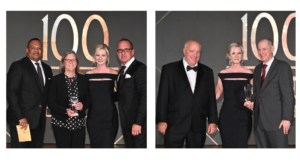 The high-profile CES notched four Grand Awards for the Consumer Technology Association (CTA), including the Largest Trade Show of 2018 with more than 2.7 million nsf of exhibit space. Gary Shapiro, CTA President and CEO, closed out the gala by receiving TSE’s highest honor, the Gold Standard in Excellence Award for his advocacy work and for bringing world-wide publicity to our industry. CES was also honored as Show with the Most Commendable Green Initiatives, and the Marketing Genius of the Year Award.

The National Restaurant Association Restaurant, Hotel-Motel Show was the star show of the year by virtue of its innovation, high level of planning and execution. The 2018 champ also turned in some sizzling metrics, including a 715,108-net square foot (nsf) exhibit floor that placed the show 15th on the Gold 100 rankings of the year’s largest exhibitions. The annual Chicago expo received the trophies as well for being the Most Innovative Show of 2018 and having The Most Impressive Surge in Sponsorship Sales.

“Congratulations to all of our Grand Awards honorees and all 100 of the shows that made up the latest Gold 100 class. To reach this stage is a great achievement,” said TSE Publisher and Editor Gabrielle Weiss. “Gary Shapiro’s undeniable contribution to our industry was a significant honor and we are thankful for his support and efforts. Mary Pat Heftman and her team’s efforts were hard-won in the competitive category of Greatest Show of 2018. All of our Grand Award winners and our Women to Watch recipients are great examples of the entire industry’s accomplishments in 2018.”

Reed Exhibitions’ G2E – Global Gaming Expo was also a multiple winner with a pair of Grand Awards, and Informa Markets was declared the Top Organizer of 2018 after landing a dozen shows on the Gold 100 rankings totaling well over 5 million nsf of exhibit space.

The awards presentations capped another memorable Gold 100 Awards & Summit for the organizers of the 100-largest trade shows of the previous year. This year’s event brought together more than 100 show organizers and industry partners at the Fairmont Grand Del Mar in San Diego for nearly a week of education, networking, and the presentations of the iconic crystal Grand Awards trophies.

Save the date! Next year’s Gold 100 Awards & Summit will take place at the Ritz-Carlton Bacara in Santa Barbara from Oct. 7-9.