GES: That Name Rings a Bell 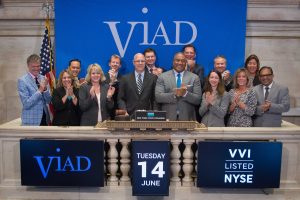 New York, NY – The captains of industry who have rung the closing bell at the New York Stock Exchange (NYSE) now include Steve Moster and the leadership team at Global Experience Specialists, Inc. (GES) and its parent company, Viad.

Moster, President of GES and President and CEO of Viad, led a cadre of executives to the iconic balcony overlooking the trading floor on June 14 and started the flurry of clangs that rung down the curtain on Wall Street for another day.

“We nailed it,” Moster told Trade Show Executive. “It was a great thrill, especially since we were able to bring along the senior executive leadership team.”

The occasion of the closing-bell ceremony helped Viad mark the 20th anniversary of its listing on the NYSE. The company’s representatives on Wall Street arranged to have Viad and GES do the honors at closing time.

“It was truly an honor and a once-in-a-lifetime opportunity,” Moster said. “There is such a rich history with the New York Stock Exchange and with Viad.”

And with about 150 people looking on from below at the end of a down day for the Dow Jones Composite Index, Moster and the GES party created the requisite number of brisk clangs (in the pitch of D) and then brought down the traditional wood gavel as an exclamation point. The process brought out a nice round of applause from the floor. A video recap of the moment is available at: http://livestream.com/NYSE/ViadCorp

Moster also presided over a meeting with Wall Street analysts at the NYSE to discuss the company’s steady, positive performance. Viad stock has been within a range of $26.62 to $32.15 over the past year.

The most recent earnings report from Viad noted revenues of $236.1 million in the First Quarter, an (8.1)% decline from the same period last year. Moster chalked the retreat up to a negative show cycle. Same-show performance, he said, was up 5.3% over 2015. “That’s pretty strong growth,” Moster said. “The underlying industry remains stable and growing.”

Moster said the analyst briefing was well received by the participants, who were by and large on the same page as the company about the near-term future, which includes the integration of onPeak and a plan to begin providing registration services to U.S. clients later this year.

And if all goes well, it will be a bellwether year for Viad and GES.