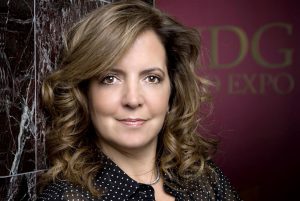 Framingham, Mass. – Mary Dolaher stepped down as CEO of IDG World Expo and launched IRL Events last summer. In October, her new company won a bid from the Entertainment Software Association (ESA) to manage E3 – Electronic Entertainment Expo, which ranked No. 43 on the Gold 100 Class of 2015.

IDG World Expo had managed E3 since 2009 with Dolaher at the helm. In January 2016, International Data Group (IDG), parent company of IDG World Expo, hired Goldman Sachs to explore strategic options. After “exploring options” for the last year, word on the street is that the sale of IDG is in the works.

“I had a great career at IDG and I’m thankful for the opportunities I had there, but it was time for a change,” Dolaher said.

She hired several former staffers to join her at IRL after winning the bid to manage E3 and Anime (AX). “It’s helpful to have the same team because there’s so much institutional knowledge,” Dolaher said. She talked to TSE this week about her venture with the brand she helped launch.

IDG World Expo and Dolaher have a long history with E3. Dolaher has worked on the event since its launch in 1994, and IDG World Expo has managed the event on and off since. Over the years as the video game industry has grown and changed, E3 has evolved from a retailer show to a media summit to a hybrid trade and consumer show.

The industry appears to be in transition again as a new generation of gamers pushes the industry in a new direction. “Today traditional retailers are dwindling, and the media environment is changing,” said Dolaher. “Bloggers have more and more influence. With social media, they are ones who can make or break a game.”

Despite these losses, there’s no denying that E3, held annually at the Los Angeles Convention Center, is one of the best known brands in world. Last year’s show shattered social media records with billions of Twitter impressions and millions of hours of content consumed on Twitch.

In 2016, ESA launched E3 Live, a pro-sumer event that ran concurrently with the trade show. It attracted 20,000 attendees. Dolaher told TSE several announcements are planned in the coming weeks.

In addition to E3, IRL is managing Anime Expo (AX), a five-day fan fest held annually 4th of July weekend at the Los Angeles Convention Center. The 26-year-old event attracted 106,000 attendees last summer. The Society for the Promotion of Japanese Animation (SPJA), which owns the show, manages the programming and talent. “The event runs 24 hours a day, so you can imagine the effort it takes to put that show on,” Dolaher said.

IRL sells exhibit space and sponsorships for AX. IDG World Expo had the management contract for the event for the last seven years, Dolaher said. “We have brought in companies that are non-endemics for them,” she said. “The show has grown tremendously over the years.”

Dolaher told TSE she is exploring new launches serving the video gaming industry in China and Dubai. She is also in talks with TV program to sell advertising and sponsorships, as well as build an event, for a fast-growing $9 billion industry.

IRL Events is based in Framingham, Mass., and has 15 employees located in Los Angeles, Washington, D.C., Phoenix, Connecticut and New York. Dolaher is sole owner of IRL. “I’ve had lots of offers from investors, but for now I’m doing it myself because we can be profitable,” she said.