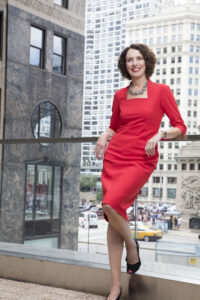 CHICAGO —When she takes charge of Choose Chicago on May 9, Lynn Osmond will hit the ground running. Not only has she spent 25 years heading the Chicago Architecture Center, she also has served as a Choose Chicago board member, so she knows the organization’s ins and outs. To top it all off, she will become Choose Chicago’s first CEO.

Choose Chicago conducted an exhaustive global search, led by a 13-person Search Committee, for the person to take its top spot, when they realized their answer might be right in their own backyard. “When they decided we needed someone with boots-on-the-ground experience, the fingers started pointing at me,” Osmond said. “They knew what I’ve been doing, and that I know all the nooks and crannies. I have the narrative down as far as why to choose Chicago.”

In her new position, Osmond plans to connect show organizers to the city’s many gems — experiences such as the architecture cruise, but also some lesser-known ones. “Convention-goers are looking for authentic tourism experiences, to go into the outlying neighborhoods — places like Rogers Park and Hyde Park — in addition to seeing the typical tourist attractions. We need to play on that for pre- and post-activities,” Osmond said.

Though her focus is clearly on how she can help grow Chicago’s position as a convention leader, the fact she is a woman leader is not lost on her. In fact, she just completed a one-year term as President of the International Women’s Forum in Chicago. “I plan on really working closely with the women in this industry,” she said.”It will be a focus of mine in this role.”