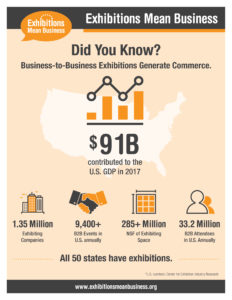 DALLAS — Blowing away earlier estimates, newly released data about the B2B exhibitions industry show it contributed a record-setting $91 billion to the U.S. gross domestic product in 2017.

The updated numbers were released this week by the Center for Exhibition Industry Research (CEIR). The original estimate was roughly $81 billion, but following extensive talks between CEIR and Chief Economist Allen Shaw, of Global Economic Consulting Associates Inc., it was determined the 2017 data had been underreported. The correct dollar amount was actually $10 billion higher.

The number reflects direct spending of organizers/hosts, exhibitors and attendees, as well as capital expenditure by facility owners.

Shaw said they decided to re-examine the numbers after Oxford Economics’ latest study came out on the economic significance of meetings.

“The study shared investment data of facility owners in 2017 that wasn’t incorporated in our initial calculation,” he said. “The data is significant to our industry, which is why we updated the GDP contribution total.”

That $91 billion statistic will be celebrated and shared with members of Congress next month during Exhibitions Mean Business campaign’s fifth annual Exhibitions Day on Capitol Hill June 5-6.

The staggering dollar figure not only establishes the trade show, conventions and exhibitions industry as an economic powerhouse but emphasizes its role in the health of the U.S. economy.

During Exhibitions Day, professionals from across the country educate members of Congress about the power of face-to-face events and encourage them to vote on legislation that will help cure some of the industry’s challenging issues. Among them are online booking scams, event safety and security, facilitating travel, and investments in infrastructure improvement.

Since 2013, Exhibitions Day has allowed for one-on-one communication with federal legislators and other policy influencers to educate and advocate for the trade show and meetings industry.

“This is the highest reported economic impact to date,” said CEIR CEO Cathy Breden. “The fact that the U.S. exhibitions industry contributed $91 billion to the U.S. GDP in 2017 is impressive and further emphasizes the vitality and strength of our ecosystem on local and national economies.”