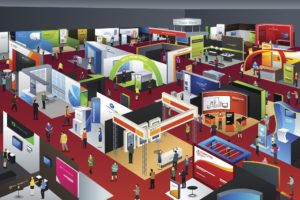 Chicago — The 2018 Exhibit and Sponsorship Sales Benchmarks and Trends Study results are in, revealing a generally upbeat outlook from participants along with a few surprising results for the future. The study — a joint effort of Freeman, Lippman Connectsand Trade Show Executive compiled the responses of 164 industry professionals whose shows typically have both sponsorships and exhibit booths. Participants were chosen from the databases of Freeman, Lippman Connects and Trade Show Executive and represented a variety of small, medium and large events.

“Respondents to this year’s survey indicated that proving the overall value of an event and properly explaining sponsorships are key factors in selling both exhibit space and sponsorships in today’s market,” said Gabrielle Weiss Publisher & Editor of Trade Show Executive. “Data from the Benchmarks and Trends report hopefully can provide guidance for those working to attract both exhibitors and sponsors.”

The annual survey looked at issues and challenges facing organizers in their exhibit space and sponsorship sales efforts and provided a resource for organizers to use in comparing an event’s performance to key benchmark metrics. Respondents represent shows that average 580 exhibitors, have an average net attendance of 11,663, average net square feet of sold exhibitor space of 351,102 square feet and an average total revenue of $6.3 million. Fifty-eight percent of respondents said they represent shows with less than 125,000 square feet of exhibit space.

Eighty-one percent of respondents came from the association/society non-profit sector, divided almost evenly between trade groups and professional groups. The remaining 19% of respondents represented independent, for-profit entities. The biggest segment of the for-profit arena is the medical and health sector, followed by business services, education, food and beverage, building/construction/home repair and raw materials.

Jeff Stanley, Executive Director — Research & Measurement for Dallas-based Freeman, a sponsor of the study, said he was surprised at the growing role of agencies and said organizers need “to offer exhibitors and their agencies more data – right after each show – to position exhibits and sponsorships favorably against other marketing/sales options”.

Sam Lippman, President and Founder of Arlington, Va.-based Lippman Connects and producer of the Exhibit Sales Roundtable, said customers are more interested today in exclusive access to specific targets. “Providing companies the opportunity to be the sole sponsor of an activity and/or service increased their ROI and organizers are charging a premium for this benefit,” he said.

This year’s study indicates growth in sponsorship sales revenue at a three-year high of 66% growth, compared to 61% last year and 62% in 2016. The biggest changes this year were:

According to survey respondents, 63% of clients now negotiate for exclusive sponsorships and 61% of respondents said they increasingly get requests for speaker slots as part of a contract. On the flip side, 22% of those surveyed said their companies are downsizing overall exhibit space in favor of more sponsorships.

In other matters, rising labor costs worry 36% of respondents this year, compared to 26% last year and 19% in 2016. And overall cost increases are the biggest concern for 50% of this year’s respondents, up from 40% last year and 36% in 2016. Other cautionary signs for the future include some decrease in event budgets and less appetite for additional exhibit space.

A complete copy of the report is available for $345 from Sam Lippman, President and Founder of Lippman Connects.