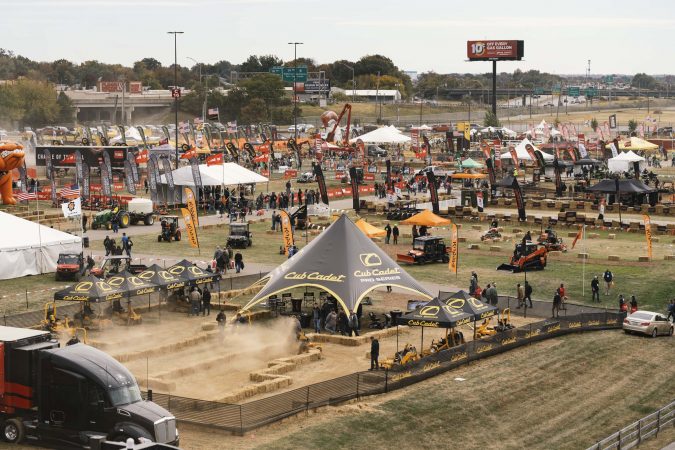 LOUISVILLE, Ky. — The Equip Exposition set a new record Oct. 18-21, with 25,000 attendees, including 1,000 exhibitors, participating. Attendees came from all 50 states and 49 countries, with the furthest traveling from Guam, New Zealand and Australia.

Along with Hardscape North America, which co-locates with the Equip Expo, the show took up 675,000 square feet inside the Kentucky Exposition Center. An expanded Outdoor Demo Yard debuted in 2022, increasing in size from 22 to 30 acres. Every available booth space was sold out — both indoors and out.

Records were also set with sponsorship sales and advertising sales for equip magazine.

This was no ordinary trade show, with features like the Drone Zone, where attendees could test their ability in a simulator, then fly a drone, and a UTV test track, where they could put UTVs through their paces on curves, over rocks, and through water and mud. There were climbing demonstrations and tree care techniques from professional instructors who used a real tree that was erected in the convention center’s Freedom Hall.

New education tracks for landscapers focused on topics such as leadership, technology and sales, and profitability, while there were expanded education sessions for dealers on topics including succession planning and profitability. Also featured were talks on timely topics such as “The California Equation,” about the impact regulatory changes to equipment in the West are going to have on the industry nationwide.

“This show remains the industry’s family reunion,” Kris Kiser, President and CEO of the Equip Exposition and the Outdoor Power Equipment Institute, which owns the show, said. “We anticipated it would be a good year and the sell-out of exhibit floor space was an indication of the industry’s optimism for the future.”

Next year’s show returns to the Kentucky Exposition Center Oct. 18-20.