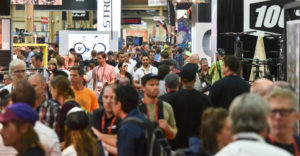 SAN JUAN CAPISTRANO, Calif. – Citing upheavals in the bicycle industry, Emerald Expositions scrubbed next year’s edition of Interbike with no current plans to relaunch the show.

Emerald left a door open, however, to bringing Interbike back in some form after next year, but at the same time laid off senior show staff members, including Show Manager Justin Gottlieb.

Emerald cited headwinds, such as industry consolidation and international trade tensions for creating some tough peddling for the bicycle industry in recent years. “The substantial increase in tariffs on bike-related imports during 2018, and announced for 2019, is compounding these challenges,” said Darrell Denny, Executive Vice President of Emerald Expositions’ Sports Group. “As a result, we are rethinking how to best serve the cycling industry.”

One potential step would be accommodating Interbike’s exhibitors and attendees at Emerald’s two annual Outdoor Retailer shows. Denny said a new bike show or a series of smaller events for the industry were also under consideration, but that no firm decisions had been made.

“We will conduct a review of the possible timing, locations and formats with dealers, brands, distributors, reps, designers and media over the coming months,” he said. “Our goal is to develop and deliver thoughtful solutions that provide strong returns on investment for all industry participants.”

Emerald’s decision to park Interbike came just a year after the show was moved from Las Vegas to Reno. When Emerald announced the move in 2017, the Reno-Tahoe market was portrayed as a low-cost, non-union venue for exhibitors, and a bicycle-friendly outdoor setting for attendees. Emerald had committed to the Reno-Sparks Convention Center through 2022.

In 2019, Interbike faced some potentially difficult competition from Eurobike in Germany. Eurobike’s dates were recently moved from late July to Sept. 4-7, just ahead of Interbike’s Sept. 15-19 dates.

The metrics for the 2018 Interbike were not released due to Emerald’s status as a publicly traded company.