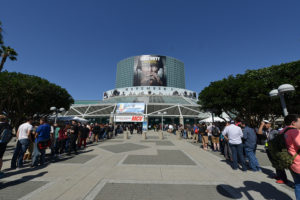 “The advancements in technology unveiled at E3 will redefine and drive worldwide growth of the most meaningful form of entertainment on the planet,” said Michael Gallagher, President and CEO of Entertainment Software Association (ESA), the trade association that represents the U.S. video game industry and owner of E3.

E3, which ranked No. 43 on TSE’s Gold 100 Class of 2015, allowed about 5,000 pro-sumers to the show in 2015. While E3 had traditionally been an industry-only event since its launch in 1993, ESA allowed its member companies to distribute passes to their most valued customers. In 2016, ESA launched E3 Live, a pro-sumer event that ran concurrently with the trade show. It attracted 20,000 attendees.

In February, E3 announced it would open to the public on a limited basis, selling 15,000 tickets to consumers. Expo passes were sold at $149 for the first 1,000 and $249 for the rest of the 14,000 available, said Madeline Kruzel, Vice President and General Manager of IRL Events, which manages the show for ESA. See related content, E3 to Open Entire Show to Public This Year, at: https://tradeshowexecutive.com/archive/industry-news/e3-open-entire-show-public-year/

“The IRL Events team has worked on E3 for 20+ years, and during that time we’ve seen the show evolve in many ways,” said Mary Dolaher, CEO and Founder of IRL Events.  “ESA’s decision to allow consumers to attend the show this year was a great success, and reflects the crucial need to be agile and work hand-in hand with exhibitors when planning for future events. Change is good, but execution is everything.”

To address the evolving needs of both professional attendees and the new consumer audience, E3 introduced several new features, partnerships and programming options. New in 2017, the E3 Coliseum featured two full days of programming, including live demonstrations of upcoming games, panels, and conversations with leading video game figures like Hideo Kojima, Jack Black, Tim Schafer, Ed Boon and Randy Pitchford. Held at The Novo at L.A. Live, the E3 Coliseum was streamed worldwide, allowing video game fans at home to watch and ask panelists questions through a partnership with Facebook.

Esports also made its debut at E3 this year. ESA and ESL, which operates branded international and national leagues and tournaments, partnered to launch the E3 ESPORTS ZONE that featured a full-size esports stage and spectator seating. Located in the South Hall of LACC, competitions featured top teams and the popular esports titles, including Vainglory and the new Quake Champions. The competitions were streamed live on Twitch and simulcast on E3’s live-stream portal at live.e3expo.com.

Facebook expanded its presence at E3 with an activation, called Raise Your Game, which invited attendees to immerse themselves in a series of engaging experiences on the social media channel. Facebook has had meeting space at E3 for a number of years, but this is the first time Facebook had a public presence at E3 with a booth in the lobby of the West Hall of the LACC. More than 800 million people play at least one Facebook-connected game every month, according to the company.

In addition to an increase in exhibiting companies and attendance, sponsorship revenues were up, Mary Dolaher told TSE.

The show generated 15 million E3-related posts across Twitter, Facebook and Instagram, according to the most recent data available last Thursday. In addition, tens of millions of gamers watched more than 5.5 million hours of E3 content on Twitch, the official streaming partner of E3.