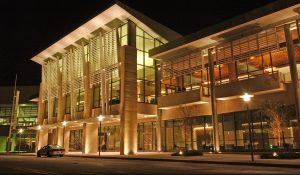 Baton Rouge, LA – The flooding in Louisiana – which left 13 people dead and 60,000 homes damaged in and around Baton Rouge — is being called the worst natural disaster in the US since Superstorm Sandy in 2012. Despite the historic flooding in the region, the city’s downtown, located along the banks of the Mississippi River, was left largely untouched.

“The River Center, as well as downtown hotels, restaurants and attractions, were not really impacted by the flooding,” Karron Alford, Director of Marketing & Information Technology for Visit Baton Rouge, told Trade Show Executive. “There were no events at the convention center during the flooding, but the venue is now being used as an evacuation center.”

The Baton Rouge River Center features a 70,000-sf exhibit hall and 17 meeting rooms. The entire complex, including the Arena and Theatre for the Performing Arts, offers more than 200,000 sf of space.

Two events scheduled at the Baton Rouge River Center in the next few weeks have been relocated to other cities, said Alford, since the convention center is being used as a shelter for flood victims, and most hotels in the area are occupied by flood survivors, recovery workers, Federal Emergency Management Agency (FEMA) staff and other personnel related to flood damage and recovery.

As residents and authorities continue to clean up, President Barack Obama toured the area yesterday to see firsthand the damage that has left more than 115,000 residents to seek assistance from FEMA.

“While the flooding will live in our memories for years to come, this tragedy will also redefine the Baton Rouge area in a positive way,” said Alford. “One storyline that remains is the amazing people who define who we are as a city, parish and area.” Late last week, Visit Baton Rouge released a video, called “I AM BATON ROUGE” (https://www.youtube.com/watch?v=i25ipVxjVcM), which showcases the strength and resiliency of the residents in and around Baton Rouge, she said.

“We expect our convention center to return to normal operations soon, but we’re exactly not sure when at this point,” said Alford. “We are anticipating the venue will be open and ready for business in early October.”