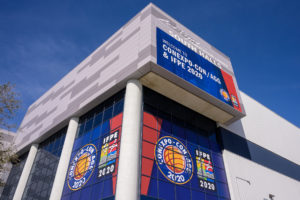 Moving ahead as planned in the near term are IFPE in Las Vegas, the Optical Fiber Communication Conference and Exhibition (OFC) in San Diego and The American Academy of Orthopaedic Surgeons (AAOS).

The Association of Equipment Manufacturers (AEM), produces the triennial CONEXPO-CON/AGG and IFPE, ranked No. 1 in the Trade Show Executive Gold 100 Class of 2017, opens March 10 at the Las Vegas Convention Center (LVCC). AEM reports total registrations are more than 120,000. Not immune from COVID-19 concerns and travel bans, AEM also reports CONEXPO-CON/AGG exhibitor cancellations represent less than 3% of the show’s total exhibit space of 2.7 million net square feet (nsf). The association has re-sold 15,500 sf of the cancelled space. IFPE is experiencing a deeper impact due to the international nature of the show.

Related. See how this exhibiting company worked around thier COVID-19 concerns to attend the show: https://tinyurl.com/vysdqbg

In California, OFC 2020 runs from March 8–12 in San Diego. Produced by the Optical Society of American, OFC 2020 is expected to experience dips in attendance because of COVID-19. The show ranked No. 98 on the TSE Gold 100 Class of 2018 with more than 15,000 attendees and nearly 200,000 nsf. “OFC has taken innovative steps to allow for remote two-way participation via video-conferencing for all technical registrants,” according to the OFC website.

In March, multiple shows on the Gold 100 and Fastest 50 lists are scheduled to go on as planned. The American Academy of Orthopaedic Surgeons (AAOS) will be held March 24 – 28 at Orange County Convention Center (OCCC) in Orlando. The 2019 AAOS drew 29,448 attendees and 758 exhibitors in 189,607 nsf of exhibit space. The Border Security Expo, produced by Clarion Events, will be held as scheduled March 11-13 at the Henry B. Gonzalez Convention Center in San Antonio.

This, after a week where shows were canceled or postponed around the world over mounting concerns of community spread, travel bans and intense media coverage causing historic disruptions in the trade show and events industry. U.S. show cancellations of note:

On March 1, citing the global nature of their event, The International Housewares Association (IHA) canceled The Inspired Home Show 2020. The show ranked No. 13 on the TSE Gold 100 Class of 2018, drew 51,000 attendees and 2,205 exhibitors from 50 countries spanning 812,000 nsf. “International participation accounts for 30% to 40% of our buying audience, as well as 30% to 40% of our exhibitors,” said IHA VP Marketing Leana Salamah.
Soon after, New Hope postponed Natural Product West (NPW), which was scheduled for March 3-7 in California. “It is now clear, despite continued advice from local government and health authorities that the City of Anaheim remains open, that the majority of our community want the show, but they do not want it now,” according to a statement on the NPW website.
On March 5, HIMSS canceled its show for the first time in 58 years. It was scheduled for March 9-13. The show ranked No. 21 on TSE’s Gold 100 Class of 2018, and in 2019 in Las Vegas drew 43,725 attendees and 1,364 exhibitors spanning 615,520 nsf. “There are concerns about disproportionate risk to the health care system given the unique medical profile of global conference attendees and the consequences of potentially displacing health care workers during a critical time.” HIMSS is launching Virtual HIMMS20: https://www.himssconference.org/
On March 6, Reed postponed ISC West, which was scheduled for March 17-20. The show, ranked No. 55 on the TSE Gold 100 Class of 2018, will now occur in July at the Sands Expo Center in Las Vegas. Will Wise, Reed Exhibitions’ Group Vice President of Security and Technology events, told TSE he expects to have new dates in the next week.
Show organizers for SXSW, which was scheduled for March 13-21 in Austin, had planned to go forward until the City of Austin canceled the dates for its 2020 event on March 6. “We are devastated to share this news with you. ‘The show must go on” is in our DNA, and this is the first time in 34 years that the March event will not take place,” according to the SXSW website.
Emerald City Comic Con, produced by ReedPOP and taking place at the Washington State Convention Center in Seattle—a location working to contain spread of COVID-19 cases—postponed its show on March 6.

Both PAX East and the Chicago Comic and Entertainment Expo (C2E2) ran without incidents related to COVID-19. At C2E2, held February 28-March 1 at McCormick Place, attendance was up to 95,000, from 2019’s total of 90,000, said Kristina Rogers, Event Director for ReedPOP. She reported the show floor increased by 5,000 square feet. “We had roughly five guests and a company who was bringing in content to the show who needed to cancel due to travel restrictions from their countries of origin, but our exhibitor base was not impacted,” she said.

Also this week, UFI and the Society of Independent Show Organizers (SISO) launched the “This Show is Open” campaign, which includes material for organizers to add visuals and texts highlighting the fact that, while numerous exhibitions around the world are being postponed or cancelled due to COVID-19, many shows are taking place successfully around the world. Materials can be downloaded at: www.supportingevents.org.

Many service providers and associations held webinars for clients to support the industry professionals. In a webinar on COVID-19, Freeman reported that less than 1% of the 5,000 events that the company will produce globally in 2020 have canceled or postponed, and some shows held in recent weeks have reported gains.

If you or your organization would like to share your story, toolkit, webinars, fact sheet(s) or talking points with the larger TSE community, please email gweiss@tradeshowexecutive.com.

Read all our coverage on COVID-19 online in TSE’s Special Report section at https://tradeshowexecutive.com/tse-covid-19