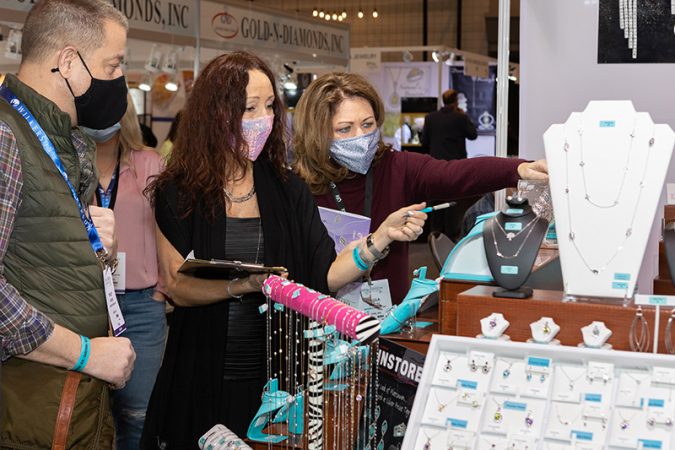 ATLANTA—Cobb Galleria Centre has started the year on the right track by hosting three major shows in February and March: the Atlanta Shoe Market, the Atlanta Jewelry Show and the Southeast Flooring Market.

The Atlanta Shoe Market, held February 20 to 22, was attended by 1,100 buyers, which is about 70 percent of the show’s typical attendance. Exhibitor participation was at about the same rate, taking up approximately 170,000 square feet of exhibit space.

The show used Cobb Galleria Centre’s Safety First protocols, with measures that included temperature check kiosks at each entrance, a redesigned floor plan and monitors to check for facemask compliance. Atlanta Shoe Market Executive Director Laura Conwell-O’Brien said the success of the show “was based on safety first. I believe that we achieved that from the very first step in the door.”

She added that her industry requires a live show for the buyers.

“It’s very difficult for them not to have the capability of touching and feeling the shoes,” she explained. “Zoom may work for some industries; however, it’s definitely not the ideal situation for the buyers in the shoe industry. So once I felt comfortable that we could safely achieve the criteria that were set forth by the state and the CDC, I felt that we could move successfully toward a safe show.”

Next up at Cobb Galleria Centre was the Atlanta Jewelry Show March 5 to 7. The trade show featured nearly 200 vendors and set records for the number of retail buyers who attended. That show built off the success of its predecessor and included numerous safety protocols, such as complimentary PPE kits.

The following week, the Southeast Flooring Market became the country’s first flooring trade show in more than a year when it opened on March 11. Show management reported a successful market for both buyers and sellers, with safety procedures including required pre-registration, staggered arrival times and pre-arrival health screenings.