Behind the Scenes At Biden’s Summit for Democracy 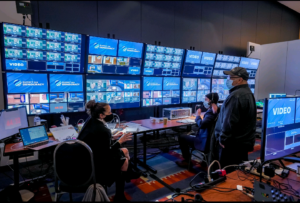 WASHINGTON, D.C. — December 9 and 10, 2021, were far from just another couple of days at work for Mike Wohlitz, Senior VP of Design Enablement at Freeman. These were the dates of what he called the most challenging event he’s ever done, from a broadcast perspective: 22 time zones, simultaneous translation of seven languages, four studios in D.C., 200 presenters from all over the world. And the star of the show was none other than President Joe Biden.

The virtual event, which was livestreamed on state.gov, was known as the Summit for Democracy. It brought together more than 200 leaders from government and the private sector from around the world to discuss important initiatives across three principal themes: defending against authoritarianism, addressing and fighting corruption, and advancing respect for human rights.

The goal of the Summit was to create multinational partnerships and initiatives over the next year — what they are calling a “Year of Action” — focusing on global democratic renewal, then report back a year later at a second Summit, which the U.S. Government hopes will be in person, contingent on the public health situation.

So, what was it like working for the President of the United States? “We all can get a little jaded in our careers,” Wohlitz said. “I’ve done the Super Bowl and the Olympics. But I’ve never had the chance to be in the White House getting to see Dr. Jill Biden’s holiday decorations.”

Work on the three-day event, which began with a Ministerial Summit for the Heads of State, followed by two days of the Summit, began on October 1. Fortunately, he said, almost everyone who was participating was already a video meeting expert of sorts. “When you’re taking about Heads of State, they are so used to having virtual conversations from their offices, it was almost like they had their own TV stations already set up,” he said.

Five days out, they started rehearsals and tech checks. Though they were using Zoom, they wanted to make sure it felt like a broadcast — “like they were all sitting in a room across from each other,” he said.

Security was a major concern, with pre-production checks of the infrastructure to make sure that it could not be hacked. His team worked across several teams, not only from the White House and Biden Administration but also the State Department and the National Security Council.

In the end, as much as the producers controlled every aspect they could, some were out of their control, such as bandwidth, interconnectivity, or a participant who had been coached not to mute his mic deciding to put it on mute anyway.

“At the end of the day, you’re only as good as Zoom,” Wohlitz said. “At a live event, I can control my cameras in the room, but you can’t control someone else’s computer. Hybrid meetings are a whole new art form.”