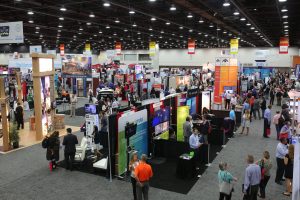 Washington, DC —The American Society of Association Executives (ASAE) will deploy beacon technology for the first time at its annual meeting, August 13-16 at the Salt Palace Convention Center, Salt Lake City, UT. The meeting is expected to draw some 5,500 attendees.

“We have been using beacons for almost two years at some of our smaller events and have had some great ‘ah-ha’ moments,” said Allison Wachter, CEM, ASAE’s Director of Exhibitions & Registration. “We’re looking forward to seeing what new insights we might gain in this larger environment.”

ASAE will tap a new wearable beacon technology powered by TurnoutNow. Attendees who opt in during registration are issued badges with beacons that use Bluetooth wireless technology to transmit to receivers located throughout the meeting areas as well as the 230,000-square-foot expo hall. TurnoutNow’s cloud-based data analytics technology then provides real-time data on everything from show-floor traffic patterns to which education sessions are most popular.

“Beacon technology tells us a lot about our meeting,” Wachter said. “We can tell without leaving our office which meeting rooms are almost full, which areas of the expo halls are hot and which might need some traffic drivers. We also have the ability to drill down further. For example, what type of attendee is going to a specific session? Sometimes that can be surprising information. We might have designed a class for a specific audience, but find out that a different type of attendee is actually attracted to that topic.”

Wearable beacons differ from beacon-based data collection systems that require attendees to download an app and activate Bluetooth on their devices. In that model, the attendee’s smartphone or tablet acts as a receiver to beacon transmitters placed around the event space. The quality of the data relies on the willingness of attendees to keep the beacon activated, which many attendees say too quickly drains their cell phone batteries.

Although the wearable beacons do not run through ASAE’s event app, attendees can see their beacon report in the app, Wachter said. These reports show education sessions attended, education credits earned and booths visited. Exhibitors will receive a complimentary report with real-time booth analytics.

ASAE will also be using a new app by Double Dutch at the annual meeting, with “cool new features that include gamification, an activity feed, direct messaging and topic channels to name a few,” Wachter said. “We’re excited to bring this engagement platform to the annual meeting, where connecting with colleagues and exhibitors is a top priority.” She said gamification will be used to help increase participation within the app, and to encourage attendees to visit the exhibit hall, learning labs, community connection events, as well as a new area called Association Exchange.

Located across from the registration area, Association Exchange is a one-stop shop for all things ASAE: Attendees can browse the newest ASAE publications; participate in a Career Insight Session; learn more about the Power of A and ASAE’s Political Action Committee; and explore the latest research from the ASAE Foundation.