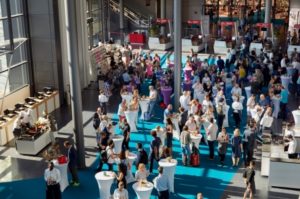 Frankfurt, Germany — Messe Frankfurt says it equaled its earnings record in 2016 and expects even better results for this year with robust growth in Germany and around the world.

The highlights also included a record EBITDA, pre-tax earnings and annual new income, which boiled down to around 50 million euros ($55,918,277). “We have made enormous progress in all areas and will continue to invest and grow,” Marzin said.

International events continued to play a major role in Messe Frankfurt’s performance with about 38% of total company revenues being generated outside Germany. The current fiscal year will see 10 new events launched by Messe Frankfurt in other countries.

Messe Frankfurt credited the international scope of its show brands for lifting participation in exhibitions held at its base in Germany. The company recently hosted more than 47,500 attendees at its biennial Techtextil and Texprocess this Spring, a 14% increase over 2015. The June 24-27 Tendence notched a 20% increase in exhibitors and expanded its exhibit space from 82,300 gross square meters (885,870 square feet) last year to 92,000 sm (990,280 sf).

The massive Messe Frankfurt exhibition center hosts 50 shows per year and provides around 592,127 sm (6,373,602 sf) of indoor and outdoor exhibit space. As part of a major capital improvement program, a new exhibit hall is under construction that will add 33,600 sm (361,667 sf) of exhibit space to the grounds’ total when it is completed next year. “From our strong position, we can continue to invest in developing our Group in the long term and in those precise areas where the needs of our customers exist,” Marzin said.

Reach Wolfgang Marzin at +49 69 75 75-0 or wolfgang.marzin@messefrankfurt.com